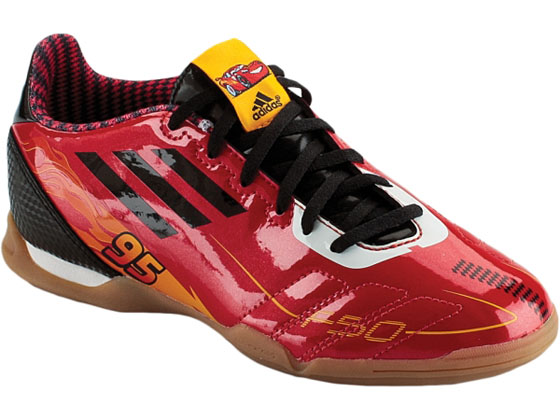 When the movie Cars first hit theaters, every little boy 5 and under had to have Lightning McQueen on their backpacks, melamine plates, lunchboxes and light-up shoes. Since Cars 2 has emerged, a rebirth of McQueen merchandise has flooded the shelves and little boys are after Lightning once again. One of these particular items is not half atrocious. The Adidas Lightning McQueen Shoe is a win-win for the kid who wants to wear his favorite Pixar character on his feet and for his parents who want him to look Euro-hip. 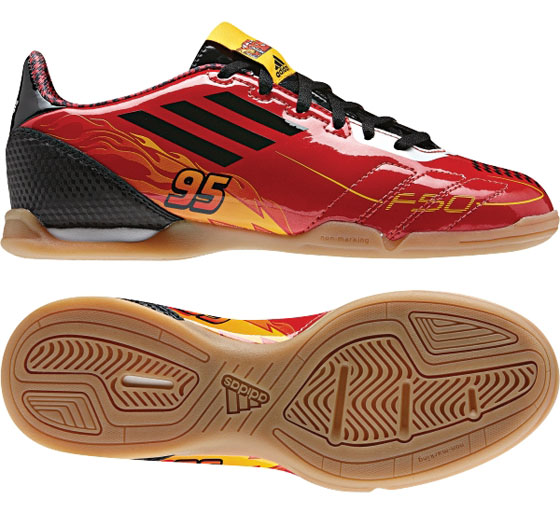 Now you can wear your favorite Disney Cars 2 character on the soccer field. Fast and fun, this checkered patent-leather kids shoe is inspired by Disney’s Lightning McQueen. Flexible non-marking rubber outsole for traction and durability.

Resembling an F50 soccer cleat but intended for street wear, these shiny red shoes look nothing like the average character shoe. The colors work great for an active boy. Black shoe laces mask dirt stains left from little fingers, while the dark red patent-leather upper is so slick that mud won’t be sticking around long.

The iconic trio of Adidas stripes has even been given an overhaul. Meanwhile, the racer-yellow tongue of the shoe has a tiny Adidas logo and image of McQueen so that there’s no argument.

Adidas’ F50 Lightning McQueen Shoes are available at SportCheck.ca for $59.99.

If your Cars-fan son needs something to do on a rainy day, may we suggest the LEGO Disney Pixar Cars 2 Limited Edition Tokyo International Circuit.

This cool looking 20 inch upright Hero ($750) suitcase from Samsonite is designed by fashion designer Alexander McQueen. From the website: Description The human form is treated just like an animal skin, with the ribcage and sternum at the front of the case, and […]

Adidas will be releasing Darth Vader themed sneakers under their classic Superstar name. The shoes features black leather on most of the parts, gold print on the tongue, gold lace rings at the top and a special insole They will be released this year to […]