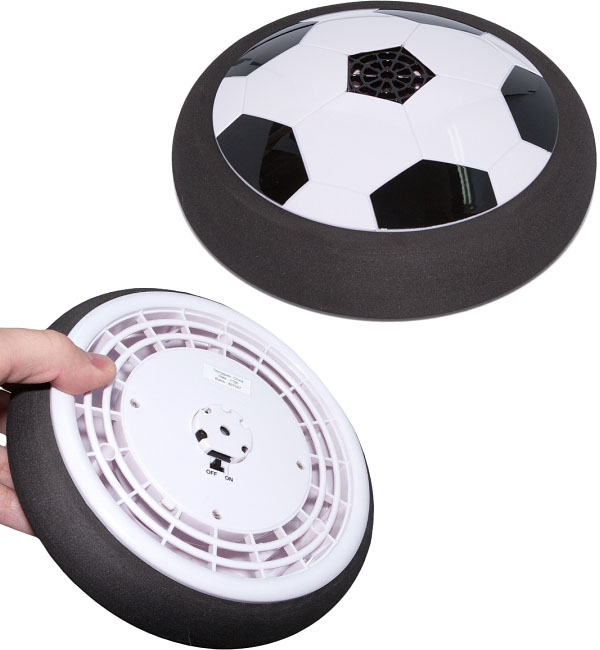 Soccer isn’t just for the outdoors anymore, not when you’ve got the Air Hover Soccer Disc. So you won’t be able to play the traditional or “normal” kind of soccer with this thing, but you can actually take the game indoors for once without having to worry about causing too much damage (we didn’t say “no damage” because there’s bound to be some sort of breakage when you play a game that involves some running, some kicking, and a whole lot of fun indoors.)

No need for cleats or special shoes when you’re kicking it up with the Air Hover Soccer Disc. But even if you can play this indoors, that doesn’t mean you can’t play outdoors also–but just make sure to avoid the water.

Make sure to pack the Air Hover Soccer Disc with your Limbo Set and Rounders Set to have an absolutely smashing time in the great outdoors. 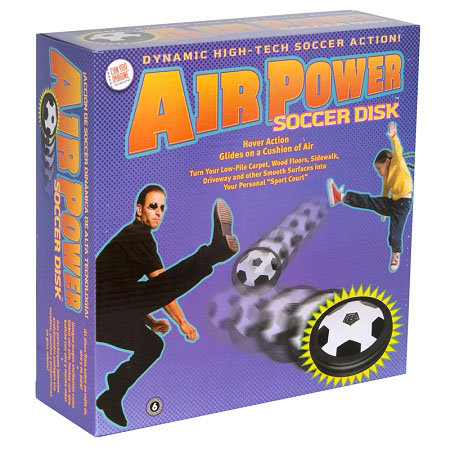 Prepare to be amazed whether you want to be or not. This super awesome, Hovering Disc will take your Game to the next level. You can kick all you want but this super gadget stays afloat on solid ground. It zooms and speeds to all destinations like a jet. With futuristic style, you can play Soccer just like you’re on an air hockey table. You can even chant and paint your body team colors while you play. Regardless, you’ll be won over by this Game piece for sure.

We love to play with it in the office as it works well over our tightly knit carpet floors and best over the smooth linoleum in our lobby and basement. We used to rarely go to the basement because of the strange ghouls of goblins that live there, but we sure do now! The ghosts, ghouls, and goblins come out and play Soccer with us and they’re ridiculously good!

The Air Hover Soccer Disc is available from Stupid.com for $17.49.

Back to the Future 2 Hover DeLorean Electronic Vehicle

The Back to the Future 2 Hover DeLorean Electronic Vehicle is going to look great on your shelf. The gull wing doors open and the hover wheels are adjustable. Just press a button to enjoy time travel lights and sounds. The light-up parts include time-coils, […]

You’re outside enjoying some summer fun with friends, then the sun goes down and the fun stops.  How many times has this happened to you?  Well now you can keep on going all through the night with the Flashflight Flying Disc.  This Frisbee like disc […]

The fun and cool little Hover-Q toy is said to be the smallest indoor infrared-controlled hovercraft in the world with its 10.5 cm (4.1 inches) in length. Blowing up a bottom of hovercraft flexible skirt in a second! Easy to control and simple to charge […]

If you’ve already covered your dog, pool, head, and feet with LEDs – what could be the next step? Maybe to make those light-emitting diodes airborne? The Flashflight Disc-o LED Flying Disc, Multi-color ($15) has nine colorful LED lights around its perimeter, giving it a […]

For the ones of you still sitting on a large collection of compact discs, here’s a nice vault that will protect your music and movies from dust and scratches.