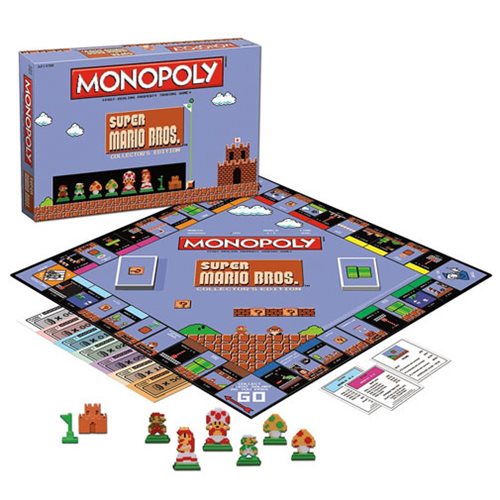 The Super Mario Bros Classic Monopoly Game takes the best of both worlds, Super Mario and Monopoly, creating a new game that is part video game and part buying, selling, and trading locations.

The eight worlds featured in the classic 8-bit version of the 1985 video game are all represented. It comes with custom 8-bit styled game pieces including Mario, Luigi, Princess Peach, Toad, Super Mushroom, and 1-up Mushroom. It also has a custom designed 8-bit style game board, custom goal poles and castles that replace Houses and Hotels, Community Chest and Chance Cards that have been renamed ? Block and Warp Pipe, as well as custom themed Monopoly money.

This is going to be a hit in your house. Just $44.99 from Entertainment Earth.

Remember the Super Mario Mushroom Keyrings from the beginning of this week? The same artist that created those, Sally Faye, also made these Nintendo Super Mario Beaded Mushroom Sterling Silver Earrings. If you’re a geeky gamer girl, you can show off your retro style and […]