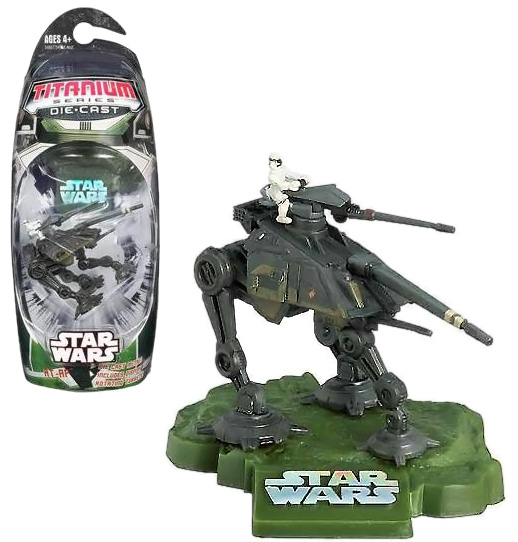 Many people, including me, love the walkers from the Star Wars movies like the AT-AT and AT-ST. They were really cool war machines and made for great toys. Now with the Clone Wars, there are more walkers available such as the All Terrain Attack Pod (AT-AP). If you like this “Sniper Tank” you’ll want to add the Star Wars Titanium Die Cast AT-AP to your collection.

SuperHeroStuff.com, a sweet online store, sent us one of these Star Wars Titanium Series Die Cast AT-AP vehicles, proving that in addition to superhero stuff, they carry a lot of Star Wars merchandise. It is great to see this product up close, to check out the extreme detail and play with the rotating turrets.

Republic war planners began to understand the shape the Clone Wars would take, they made expanding the versatility of their ground forces a priority. The All Terrain Attack Pod rose out of just such thinking. An evolved, more powerful version of the earlier AT-PT, the AT-AP turned Republic heavy infantry into medium range artillery. Add to your Star Wars collection with this die-cast metal AT-AP vehicle! This highly detailed Star Wars Titanium Series Die Cast At-Ap Vehicle features rotating turrets and comes with a display stand.

Order the Star Wars Titanium Die Cast AT-AP for only $8.50 from SuperHeroStuff.com.

Crafted from aerospace grade titanium, the Titanium Utility Ring is something worthy of a classic Bond film. The ring features a bottle opener, a straight blade, a serrated blade, a saw and a tiny comb. The ring is 9mm wide and is made to your […]