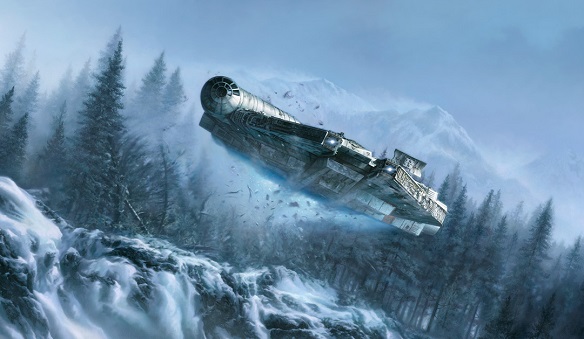 The Millennium Falcon proves that she’s still got it where it counts with the Star Wars She’s Still Got It by Jerry Vanderstelt Canvas Giclee Art Print.

In order to stop the First Order’s newest threat, a ship needed to get down to the surface of Starkiller Base, and that required getting through the defensive shields.

Fortunately, the Resistance had (had *sad face*) Han Solo, who was crazy enough to blast into the planet’s atmosphere at lightspeed, although, as depicted in this scene by artist Jerry Vanderstelt), the landing wasn’t necessarily the smoothest landing in the Falcon’s history.

Limited to just 150 pieces, the hand-numbered print measures 36″ x 21″ and is signed by the artist.

The Star Wars She’s Still Got It by Jerry Vanderstelt Canvas Giclee Art Print will be available TK but it can be pre-ordered now for $449.99 at Entertainment Earth.

Many of us love Star Wars, but if you’re like me you’re a bit too old to put regular posters up on your wall. We’re at the age where we need actual art. Fortunately, Jerry Vanderstelt Star Wars Art is available, and it enhances our […]

Recently we showed you some awesome Star Wars Paintings. Now we take a look at Jerry Vanderstelt Lord of the Rings Art for some more stunning paintings by the same artist. Just as he did for Star Wars, this artist brings the characters of The […]