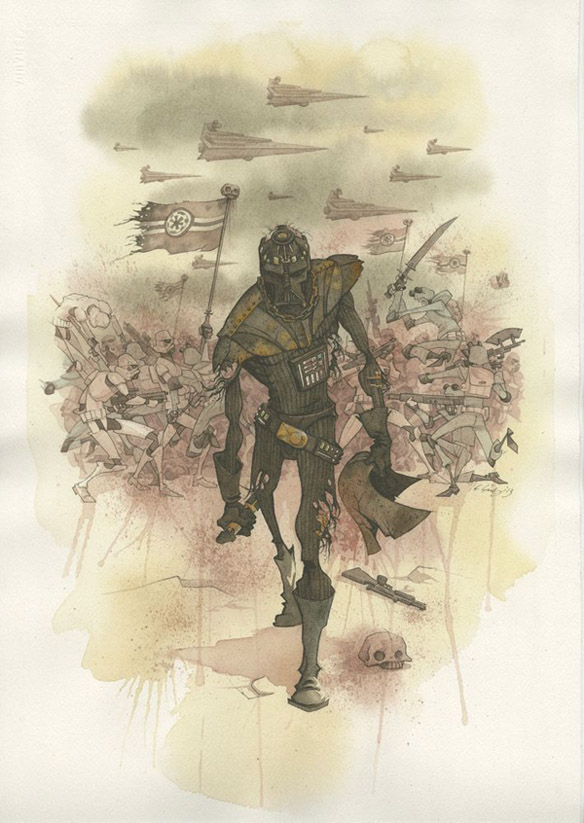 Darth Vader didn’t become a source of terror throughout the galaxy just because of his loud breathing and the Star Wars Darth Vader’s Helmet Canvas Giclee Print gives a little peek into exactly why the fallen Jedi is viewed with so much fear and respect.

I loved the Star Wars films but they did a huge disservice to Vader. Let’s face it. Aside from an occasional lightsaber duel with Luke or Obi-Wan, Vader didn’t really seem to do much. However, this 18-inch-tall print shows a battered Vader getting his hands dirty, wading out of a battle with his flowing cape gone and his helmet damaged. This is a guy to be careful around, regardless of whether he considers you enemy or ally.

The canvas print, created by artist Gris Grimley, is part of a limited edition run consisting of only 95 pieces. Each hand-numbered print is signed by the artist and includes a certificate of authenticity.

You can be a huge Sith lord fanboy just like Kylo Ren with Darth Vader’s Melted Helmet. Will you finish what Lord Vader started? Darth Vader is gone but not forgotten in Star Wars: The Force Awakens, with Kylo Ren getting his hands on Vader’s […]

Star Wars I Have You Now! Canvas Giclee Print

Poor R2-D2 is close to facing the wrath of the Dark Lord of the Sith on the Star Wars I Have You Now! Canvas Giclee Print. Han Solo deals with scum like Jabba the Hutt and Luke Skywalker will eventually have to face Darth Vader […]

Walter White and Anakin Skywalker; just two decent guys that gave in to temptation and fell to the Dark Side. The Darth Heisenberg Breaking Bad Giclee Print offers a great artistic mash-up of the two characters that have more in common with each other than […]