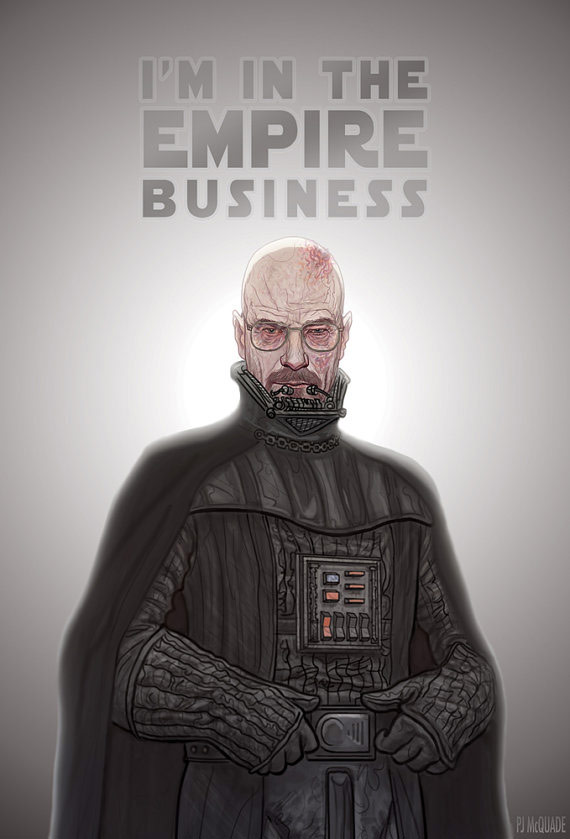 Walter White and Anakin Skywalker; just two decent guys that gave in to temptation and fell to the Dark Side. The Darth Heisenberg Breaking Bad Giclee Print offers a great artistic mash-up of the two characters that have more in common with each other than most would initially think.

In addition to ‘breaking bad,’ Anakin and Walter both eventually went for the bald look, and they both decided a change of name was needed when they adopted their new darker lifestyles, with Anakin becoming the feared Darth Vader and Walter becoming the feared Heisenberg. They also both proved the old adage, ‘the road to Hell is paved with good intentions,’ because neither actually planned to become the dark characters they eventually evolved into. And of course, both are in the Empire business.

Nobody cooks like Walter White but you can become the one who knocks in your kitchen with the Breaking Bad Heisenberg Cutting Boards. Whether you’re whipping up a batch of goodies in the kitchen or in an RV out in the middle of the desert, […]

Fans of a certain drug lord will love this Breaking Bad Heisenberg Inside T-Shirt, revealing both sides of the man who took a unique approach to dealing with a cancer diagnosis. You’ve just been diagnosed with lung cancer and want to make some quick cash […]

This Breaking Bad Heisenberg Sketch 18-Inch Plush Pillow looks mighty comfy. Breaking Bad fans will love having the Heisenberg sketch in their home and laying their head on it. Especially after a tough day of cooking. Or whatever. It is 18 inches and shows Walt […]

I don’t know about you, but I love Breaking Bad. One of the best shows ever. And if you like Walter White, you can now have this Breaking Bad Heisenberg Plush to cuddle with at night and experience the softer side of Walt. It’s Bryan […]

Celebrate your love of Breaking Bad with these cool Breaking Bad iPhone Cases. You don’t have to be Walter White to afford one either. They are compatible with iPhone 5/5S and you can choose from Cracked or Heisenberg Sketch styles. These full-color, high-quality designs won’t […]

Whether you run a meth lab or not, you need a way to move money. Sometimes that might involve laundering it, but for you and I it just means we need a cool wallet. This Breaking Bad Heisenberg Wallet will hold your cash and cards […]

Heisenberg is the one who knocks. So let him into your collection with this Breaking Bad Heisenberg 1:6 Scale Action Figure. This 1:6 scale figure of Heisenberg even comes with stacks of money included. This figure features real cloth and an extreme likeness to Bryan […]

Relive all of the excitement from Breaking Bad with this Breaking Bad 6″ Walter White Hazmat Figure. This figure features Walter White in his yellow hazmat suit. It includes a gas mask and two flasks and stands about 6.25″ tall. Mr. White is going to […]