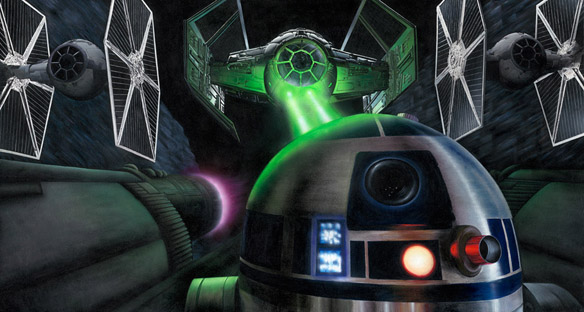 Poor R2-D2 is close to facing the wrath of the Dark Lord of the Sith on the Star Wars I Have You Now! Canvas Giclee Print.

Han Solo deals with scum like Jabba the Hutt and Luke Skywalker will eventually have to face Darth Vader but astromech droid R2-D2 knows what true courage is all about. True courage is being plugged into a little socket on the outside of an X-Wing fighter and acting as the ultimate wingman while the bad guys try to blow you out of the sky.

Artist Rob Surette created this awesome 26″ x 14″ print that features a circuit-shaking look at Luke’s race through the Death Star trench as Vader lines up to blow the future Jedi out of the sky. Fortunately (for Luke, anyway) Vader misses and hits the lovable little droid instead.

The Star Wars I Have You Now! Canvas Giclee Print will be available May 2016 but it can be pre-ordered now for $349.99 at Entertainment Earth.

Add some class to your home by displaying this Star Wars Admiral Ackbar Magnitude Canvas Giclee Print. It’s a trap! on the high seas. The admiral has never looked better. This just might be the best Star Wars artwork ever. It is certainly worthy of […]

Circuit boards can be used for so many things; snacks, clocks, keychains, cars, Christmas tree decoration – and cufflinks of course.

In space, no one can hear you scream… in excitement as your eyes fall upon the Alien in Waiting Canvas Giclee Print. This is no ordinary print. It measures 13-inches wide, 26-inches tall, and it’s printed on canvas. It’s also part of an extremely limited […]