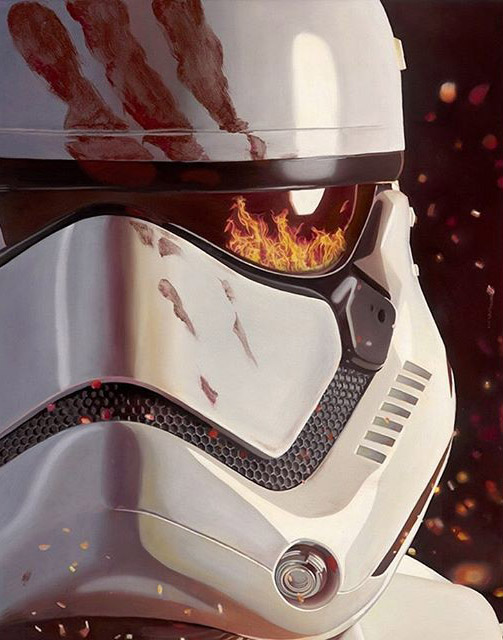 Actually, calling FN-2187 a villain might be a bit harsh. He was just a soldier doing his job, but after a fallen comrade left a bloody handprint on his helmet and he watched the homes of innocent people burn, he realized he was on the wrong side. At that point in time, FN-2187 became Finn, although he still had a little while to go before Poe Dameron actually gave him that name.

Created by artist Kevin Graham, this 22″ x 28″ print captures that moment when the man who will become known as Finn is born.

The Star Wars: The Force Awakens FN-2187 Canvas Giclee Art Print will be available May 2016 but it can be pre-ordered now for $394.99 at Entertainment Earth.

Star Wars I Have You Now! Canvas Giclee Print

Poor R2-D2 is close to facing the wrath of the Dark Lord of the Sith on the Star Wars I Have You Now! Canvas Giclee Print. Han Solo deals with scum like Jabba the Hutt and Luke Skywalker will eventually have to face Darth Vader […]

Add some class to your home by displaying this Star Wars Admiral Ackbar Magnitude Canvas Giclee Print. It’s a trap! on the high seas. The admiral has never looked better. This just might be the best Star Wars artwork ever. It is certainly worthy of […]