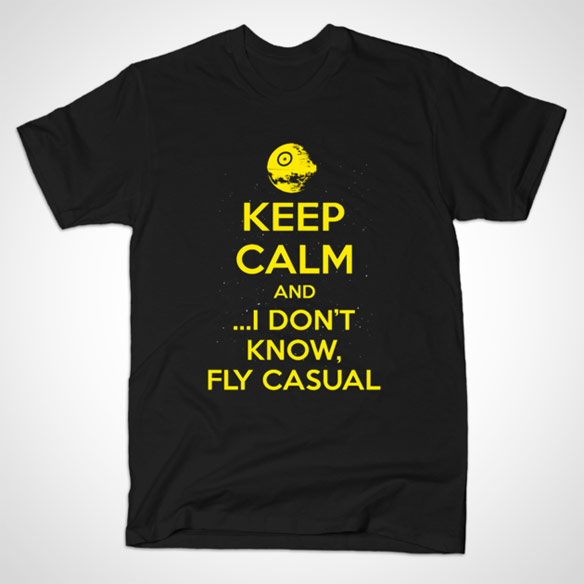 When it comes to keeping calm, nobody does smooth like Han Solo and the Star Wars Keep Calm and Fly Casual T-Shirt brings us a combination of the popular ‘Keep Calm’ memes with one of Solo’s most strategic (or is that non-strategic) plans.

Usually, the advice to keep calm is followed with a definite plan, like with the Keep Calm and Kill Zombies Raschel Throw and the Keep Calm and Don’t Blink Doctor Who T-Shirt, but we’re talking about Han Solo here and flying by the seat of his pants with the bare minimum of a plan in his head is what makes him such an unpredictable adversary.

The black t-shirt features an under-construction Death Star along with the somewhat vague advice to fly casual, and I believe one of the biggest questions left unanswered in the Star Wars galaxy is exactly how one manages to fly casual. Obviously our guys pulled it off because they didn’t get blown out of the stars.

Available for both men and women, the t-shirt comes in sizes Small to 2X.

The Star Wars Keep Calm and Fly Casual T-Shirt is available for $20 at Teepublic.

When it comes to the world of Firefly and Serenity, Captain Mal might have been the picture of cool but Jayne was the perfect image of attitude, and he pulled that attitude off while wearing an awesome hat. The Firefly Keep Calm and Bring Grenades […]

The Walking Dead Keep Calm T-Shirt offers some great advice, along with silhouettes of four inspirational survivors to help keep you motivated during the zombie apocalypse. ‘Keep calm and kill the walkers’ is a useful rule to keep in mind when the walkers start walking, […]

Doctor Who has faced some wicked baddies throughout his journeys in space and time but the Weeping Angels have to be among the most terrifying. Celebrate the Doctor and these wicked adversaries with the Keep Calm and Don’t Blink Doctor Who T-Shirt, which offers words […]