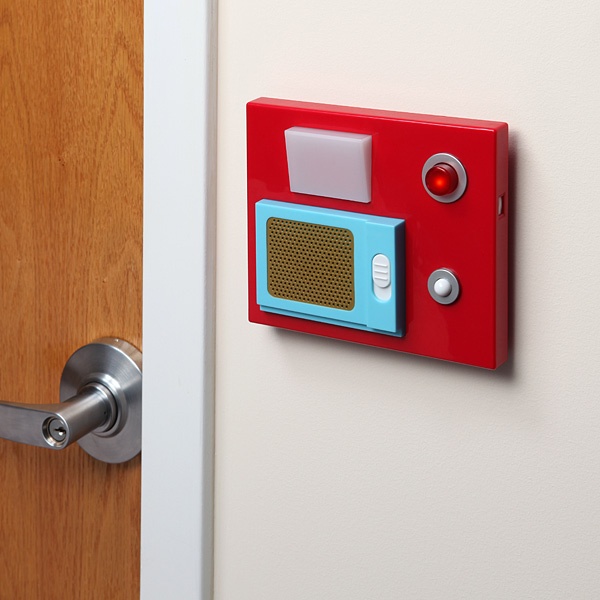 The Star Trek Electronic Door Chime will definitely add an otherworldly touch to your home once it’s installed. Frankly, the conventional chimes creep me out a bit, especially on dark and rainy nights when I’m home alone. This one, however, is completely different.

The Star Trek Electronic Door Chime looks like those communicator panels in the original Star Trek series. This chime doesn’t sound out when it’s windy but when someone passes by. It’s got a motion sensor which automatically triggers either a “red alert” sound or a door opening sound when it detects a person passing. Just make sure you’re on the run if the chime sounds off–and you thought you were home alone.

If you’re a fan of Star Trek, then you should check out these other themed goodies as well: the Star Trek Red Security Terry Cloth Bathrobe, the Star Trek USS Enterprise Lighted Mini Statue, and the Star Trek Book of Opposites. 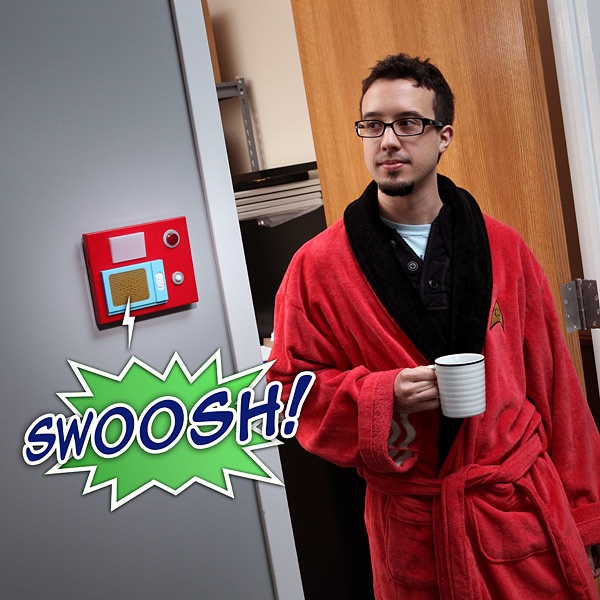 The Star Trek Electronic Door Chime is available from ThinkGeek for $29.99.

Star Trek fans and internet chat fans are gong to love the Star Trek USB Communicator.  This USB device allows you to chat online with your friends via Skype, MSN, AIM, or iChat.  This officially licensed replica communicator even makes the “chirp” sound when flipped […]

Wearing a motorcycle helmet can seriously interfere with communications, unless you have the UClear HBC100 Bluetooth Helmet Communicator. Between the wind whipping by and the roar of the engine, a typical wireless headset would be worthless. However, the UClear HBC 100 uses proven military technology […]

We all wish that we had a communicator that we could call the Enterprise with, but sadly we aren’t beaming anywhere. However, you can look like you have a Star Trek communicator with this Star Trek Communicator Mighty Wallet. It is made from Tyvek. That […]

Remember that UClear Bluetooth Helmet Communicator GeekAlerts.com posted about last month? That was the HBC-100 model, and it was meant to use with a motorcycle helmet. This new one, the UClear HBC120 Snow Helmet Communicator, gives you incredible communication capabilities right while skiing or snowboarding […]

I don’t know about you, but I hate loud wind chimes. The softer ones are okay, but most just bug me, Therefore I think this Wind Chime Alarm Clock would do a good job of waking me up.

A new little item has arrived for those trekkies who won’t say no just because they already have a Star Trek Communicator Replica and a Star Trek USB Communicator Internet Phone laying around. Say hello to the new Star Trek communicator keychain with sound effects.

You can’t use a phaser on people who irritate you and you can’t beam to work but the Star Trek: Original Series Bluetooth Communicator puts the technology of the USS Enterprise in your hands. You’ll have to resist the urge to say ‘Kirk to Enterprise’ […]

Foot In The Door – Door Stop

When your hands are full and you really need someone to hold that door for you, they usually aren’t there.  Solve that problem with the Foot In The Door – Door Stop.  Avoid damaging your expensive pumps and let this rubber shoe do all the […]