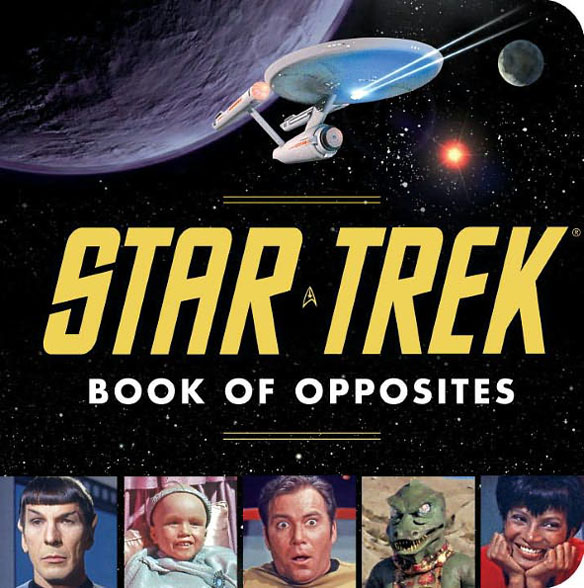 Geek parents can’t help but pass their cultured wisdom onto their younglings. Sesame Street does a fine job of teaching kids about opposites, but what about Star Trek? With the Star Trek Book of Opposites book, your budding scholar will have a much clearer understanding of the yins and yangs of life. Meanwhile, you get to have fun reliving your childhood.

EXPLORE STRANGE NEW WORDS! With the help of Kirk, Spock, McCoy, and two dozen colorful pictures from across the galaxy, teach your children the meaning of big and little, hot and cold, apart and together, and much more!

This 24-page book will entertain both adults and children alike. Dramatic photos were plucked right from the television series to help kids learn and explore the world of Star Trek, set in outer space and inside the USS Enterprise. One of the pages shows Kirk, Spock and McCoy in a serious pose with the word “appear” underneath them in large print. The next page shows the trio in the same spot, same stance, but in translucent teleport mode. Of course, at the bottom of this page you see the word “disappear” in large print. I really couldn’t imagine a better scenario to explain the contrast.

There’s even a funny page depicting “angry” as Spock grabs Kirk by the neck in a fierce choke hold. This one’s priceless, though it could backfire in the violence department. Compared to a lot of stuff we see these days, I guess it ranks as mild.

Starting from $5.95, the Star Trek Book of Opposites by David Borgenicht can be purchased through Amazon.com.

I know Star Trek figures are everywhere, but here is a great opportunity to get 6 of the original Star Trek cast figures for an unbelievable discount made by Diamond Select Toys.  The Star Trek Original Figure Set of 6 includes all your favorites from […]

If your Star Trek collectibles need a little life support, you probably need the Star Trek Dr Leonard “Bones” McCoy Sixth-Scale Figure. According to Dr McCoy’s many outbursts during the Enterprise’s five-year mission, the good doctor isn’t an engineer, a bricklayer, an escalator, a magician, […]