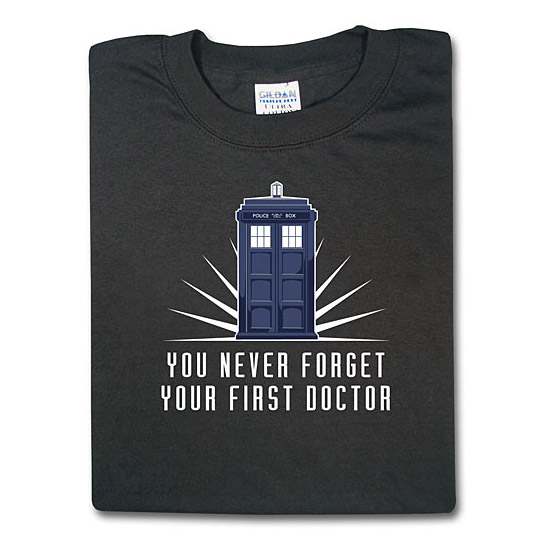 One of the great things about Doctor Who is that if, for some odd reason, you don’t like the good Doctor at any particular point in time, all you have to do is just wait around for a season or two because a new one will be showing up soon. Now you can celebrate the historic moment that you discovered the madman in the box with the You Never Forget Your First Doctor T-Shirt.

Was it Tom Baker in his crazy-long scarf as the fourth Doctor? David Tennant as the occasionally four-eyed tenth Doctor? How about Matt Smith’s bow-tie wearing eleventh Doctor? No matter who held the title when you first tuned in to the world of Cybermen, Daleks, and the little blue phone box that’s bigger on the inside than the outside, you always remember your first Doctor Who. Personally, I’m a huge fan of Tennant’s and hated to see him go, but the first image that pops into my head when I think of Doctor Who is the crazy-haired, big-nosed, jelly-baby-eating Tom Baker because his was the face I saw when I first discovered the wonder that is Doctor Who.

The face of the Doctor is forever changing but only one can have the honor of being your first. Celebrate your Doctor with the You Never Forget Your First Doctor T-Shirt for $16.99 to $19.99 from ThinkGeek.

A bunch of moviegoers might get confused but the X-Men You Never Forget Your First Class T-Shirt will have a special meaning for comic books fans that discovered Marvel’s mutant team when they first arrived on the scene. Forget about X-Men: First Class because every […]

Doctor Who It’s Bigger on the Outside T-Shirt

When most people who aren’t named Clara first encounter the TARDIS, they almost always mention how it’s bigger on the inside, but the Doctor Who It’s Bigger on the Outside T-Shirt finally lets Whovians see things from the Doctor’s perspective. I guess after spending a […]

Forget about the idea of ‘Exterminate’ because the Daleks have come up with a new way to defeat everyone’s favorite madman in a box. The Doctor Who Impersonate T-Shirt features three of the galaxy’s most evil baddies doing their best to impersonate three popular incarnations […]