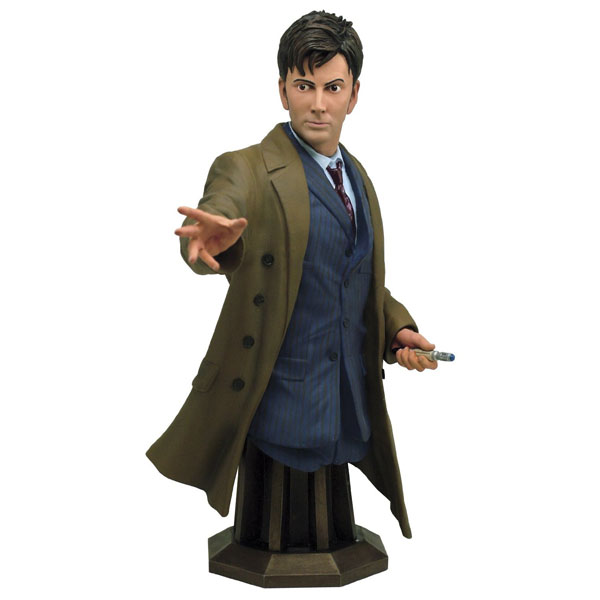 When it comes to Doctor Who, everyone has their favorite, and mine can now be brought home in the form of the Doctor Who: David Tennant As The Tenth Doctor Maxi-Bust. Can I get an Allons-y from others that are just as excited as I am?

Don’t get me wrong. There’s nothing wrong with Matt Smith’s bow-tie-wearing Time Lord, but Tennant currently reigns in my mind as the ultimate Doctor Who, with his long coat and blue suit appearing rather ordinary when compared to some of the outlandish outfits worn by other incarnations, but still looking more stylish than the Ninth Doctor.

It doesn’t hurt that Tennant also toted what I consider to be coolest sonic screwdriver, which is also depicted with the Maxi-Bust. Other sonics always struck me as a bit clunky, often making me wonder how anyone could tote them in a pocket, but this little silver beauty is sleek and streamlined for transport.

The 8-inch-tall Doctor Who: David Tennant As The Tenth Doctor Maxi-Bust is available for $89.99 at Amazon.com.

He may have been the shortest lived Doctor in the history of the show, but Paul Mcgann’s 8th Doctor was certainly memorable and his Tardis interior was amazing. Now you can keep him with you with this Doctor Who Masterpiece Collection 8th Doctor Maxi Bust. […]

Who is your favorite Doctor? If it is the leather jacket wearing and banana eating 9th Doctor, check out this Doctor Who Masterpiece Collection 9th Doctor Maxi Bust. It is nicely detailed with a great likeness of the 9th Doctor. Christopher Eccleston’s Doctor was tough, […]

Doctor Who Tenth Doctor in the Mist iPad Case

Give your iPad an air of mystery with the Doctor Who Tenth Doctor in the Mist iPad Case, an awesome eye-catching piece of artwork that captures David Tennant as the Doctor walking to the TARDIS through a spooky mist. I’m a hardcore Whovian and I […]