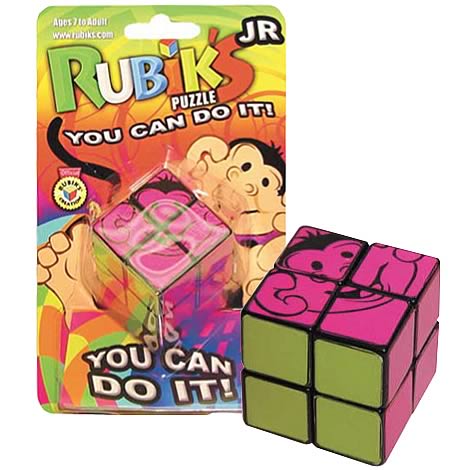 If Junior wants to get into the gaming scene, then by all means let him. If anyone you know is interested in starting out on solving Rubik’s cubes, then it might not be a very good idea to start them off with the Scruble Cube (which is a Rubik’s cube and Scrabble game combined into one) or the Sudoku Rubik’s Cube because they may be too complicated. Instead, get them the Rubik’s Junior Game.

It’s just a 2×2 cube that features a cartoon monkey print on one of the sides of the cubes for good measure. Perfect for kids and for amateur Rubiksters who are just beginning to discover the wonderfully puzzling world that Rubik’s cubes have to offer.

Rubik’s Junior. A Rubik’s puzzle for all ages!

This 2×2 cube is so easy (or the manufacturer says) even a monkey can solve it! This colorful cube comes with a monkey on it that exists as both an adorable mascot, and a painful reminder of yet another thing the monkey has mastered that man, alas, cannot.

The Rubik’s Junior Game is available from Entertainment Earth for $7.99 each.

Ice cubes do a great job of keeping drinks cold but those frosty squares can get boring fast because cold is all they do. The Lite Cubes Light Up Ice Cubes add a little color to the cold, heating up any party, soirée, or shindig […]

Just when you thought you finally got rid of the Tetris song in your head and haunting images of Tetris pieces descending from your subconscious, they went and made the 3D Puzzle Game of Pentaminoes.

We’ve probably covered enough Rubik’s Cube kitchen gadgets to fill your entire kitchen. Here’s something to go along with your Rubik’s Cube mug and the rest of them. Behold the Rubik’s Cube Salt and Pepper Mills. Now your entire eating experience can be puzzling.

Is it a puzzle game or a challenging word game that you can play to kill more than just the time? Is it an adventure game that will take you to great highs and lows, or a matching game to check how fast your reflexes […]