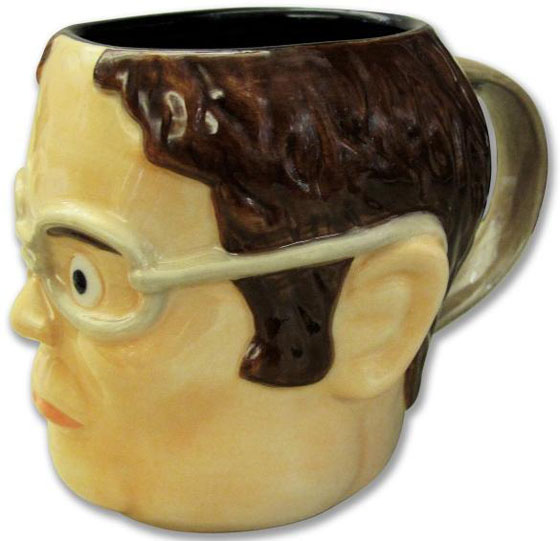 What’s the best way to wake up in the morning? Wrong, drinking coffee from The Office Dwight Head-Shaped Mug is.  Get a taste of what’s going on in Dwight’s head.  This Dwight Schrute mug is sure to put a smile on your face every time you use it.  Recall all those hilarious and sometimes crazy moments from the show when Dwight does the unexpected.  Do you remember when he raced out of the office to rescue Michael and his Foreman cooked foot? He crashed his car, got out of the passengers side all woozy, puked, then continued to drive off anyways.  Is anyone more committed to their boss?

The ego of Dwight Schrute, Dunder Mifflin’s eccentric paper salesman, is finally given the recognition it deserves with The Office Dwight Head-Shaped Mug.  Dwight often refers to himself as the “Assistant Regional Manager,” in an bald attempt to elevate himself to second-in-command to his boss, Michael Scott. He’s trained in the art of surveillance, has a purple belt in Goju-Ryu Karate, and is a former volunteer sheriff. He’s an aficionado of pop culture, science fiction, classic rock, and muscle cars. In his spare time, Dwight (along with his cousin Mose) runs majestic Schrute Farms, the number one beet-related agro-tourism destination in Northeastern Pennsylvania.
Would Dwight drink his morning coffee out of a mug shaped like his own head? Of course he would!

You can purchase The Office Dwight Head-Shaped Mug at nbcuniversalstore.com for $15.  Here are some other cool mugs: Laboratory Beaker, Shark Attack and Doctor Who TARDIS Mug.

If you are a fan of The Office, then you have to love Dwight.  With Michael Scott gone, I really hope he gets to be the boss this upcoming season.  I can only image what rules he will implement and what items he will cut […]

I’ve said it once, and I’ll say it again: I can’t live without coffee. I need it to really be awake in the mornings, even after I’d already used the Shower Shock Caffeinated Soap. A pretty clear way of illustrating this is through the Morning Mug. […]

The AmmoMug – Bullet Shaped Travel Mug is a 16 ounce travel mug shaped like a brass hollow-point cartridge round. Bang. That ought to make your morning coffee like a gunshot. This AmmoMug not only looks amazing, it is made of quality too with double-walled […]

If you fear that you will soon have a sagging jawline that sometimes comes with old age, then worry not by doing what you can to prevent it. Keep your chin in shape with the Rhythm Slim Chin Muscle Exercise machine that will let you […]

Get molecular with your coffee consumption with the Caffeine Molecule Coffee Mug, and let that cup of java be as educational as it is invigorating. Coffee is the sweet, sweet nectar that starts the day for many of us, so it’s only proper that we […]