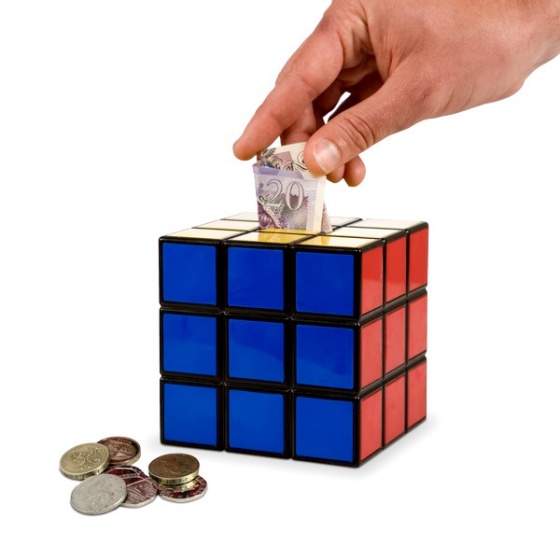 I knew this guy in college who could take any scrambled up Rubik’s cube and solve it in a matter of minutes, sometimes, even seconds. He taught me the techniques and all that, but my Rubik’s solving time still stands at somewhere around the five minute mark (pretty pathetic, I know.) That doesn’t stop me from being a fan and wanting to keep my money and loose change in the Rubik’s Cube Money Box.

The Rubik’s Cube Money Box was probably born from the imagination of people who are huge fans of the cube itself. Display your geekiness proudly and loudly with this money box that looks like a Rubik cube that’s already been solved.

Do you remember the frustration you felt as a child when you tried to solve the Rubik’s Cube? Some were clever and could twist the cube to perfection with authority. Others were less savvy but still creative. Maybe they were caught sheepishly peeling the stickers off and reapplying them when they thought the door was locked.

If you could solve the classic Rubik’s puzzle you’re clever enough to know that we should all be saving for a rainy day. This stylish money box is definitely the coolest way to do it. Thankfully it’s no puzzle getting the money out! Measures approx. 10cm x 10cm x 10cm.

When I get to work every Monday, I face my dull desk with random office stuff and supplies strewn about and I get into a Monday blue sort of stump. But I doubt anyone will feel anything but upbeat when you’re drinking up your coffee […]

If you love giving your Rubik’s Cube a spin once in a while to check if you can still hold up to the record time you once set, then you’ll also love having this Rubik’s Cube Speaker on your desk to crank out your tunes […]

Fans of Rubik’s Cube and puzzle people alike will love this Rubik’s Mirror Blocks Cube.  The idea is the same as the original, but now every block is the same color and a different size.  This futuristic looking Rubik’s Cube gets funky looking fast when […]

There are variations on the Rubik’s Cube that make it more challenging, such as Rubik’s Revenge Cube 4 X 4, the crazy Rubik’s 5X5 Cube, or the completely insane 6X6 Puzzle. People that want less of a challenge can go with the Rubik’s 2X2 Cell […]

It’s a puzzle, it’s a light, it’s the Rubik’s Cube Light, bringing the iconic 80’s brainbuster to a new generation. Kids these days have smartphones and apps and MMORPGs to keep them entertained, but way back in the 1980s, entertainment was a little harder to […]

If Junior wants to get into the gaming scene, then by all means let him. If anyone you know is interested in starting out on solving Rubik’s cubes, then it might not be a very good idea to start them off with the Scruble Cube […]