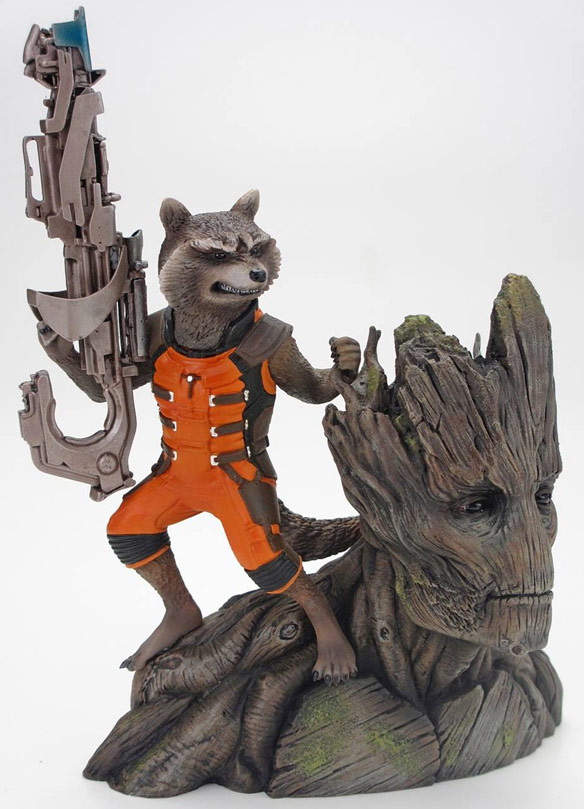 How much damage can a little raccoon do? A lot when he’s toting a gun as big as him and standing on top of a walking tree. The Rocket Racoon & Groot Kotobukiya ARTFX+ Statue brings us the unlikeliest duo you could imagine from Guardians of the Galaxy as animal joins with plant to wreak some major havoc.

The 5 3/5-inch tall, 1:10 scale statue features Rocket Raccoon standing on a base that resembles the head and shoulder of his pal, Groot. The highly-detailed statue does a great job of showing off Rocket’s expression, making it possible to believe the little guy can pack some serious attitude, and the wicked-looking laser rifle lets everyone know he means business.

Groot’s new saying is ‘I am cute’ with this Rocket and Groot Treehugger Vinyl Collectible. Even before they were Guardians of the Galaxy, Rocket Raccoon and Groot were rocking the best-friends-forever lifestyle and this 9-inch-tall vinyl statue features the two hugging it out after an […]

Guardians of the Galaxy Rocket Raccoon with Groot Action Figure

This Guardians of the Galaxy Rocket Raccoon Full-Size Replica is perfect for GotG fans who can’t get enough of the lovable(??) raccoon with the big attitude. Standing almost 3-feet-tall, this detailed replica of Rocket isn’t quite life-sized since the Marvel Comics character is said to […]

Everyone’s favorite galaxy-saving trash panda and younger, dumber Groot are ready to defend valuable batteries in the Guardians of the Galaxy Vol. 2 Groot and Rocket Raccoon Battle Diorama Series 1:10 Scale Statue. And then Rocket steals the batteries himself. Rocket might not have won […]

At last you can carry Rocket Raccoon on your back. This Rocket Raccoon Backpack Buddy is awesome. It will make you feel like a true Guardian of the Galaxy. Like Groot carrying your buddy. This plush Rocket backpack fits kids and even many adults. And […]