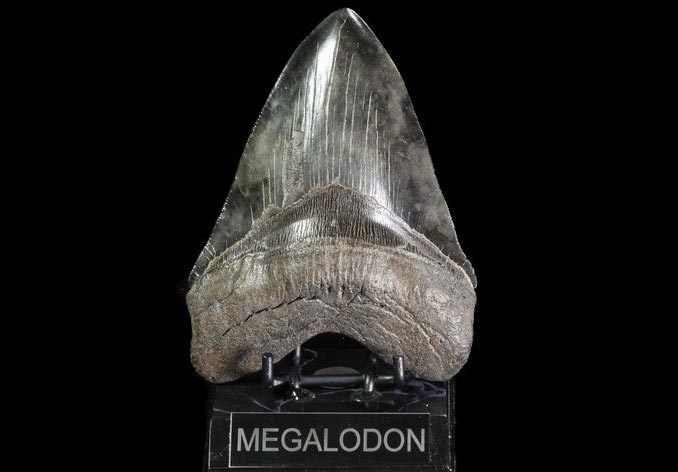 While The Meg, currently in theaters scaring audiences, is clearly fiction, megalodons are real. They aren’t terrorizing beach-goers and boaters because this species of giant sharks went extinct millions of years ago, but you can still find and buy Real Fossilized Megalodon Teeth.

Pictured at the top is a massive 6+” Carcharocles megalodon tooth fossil discovered in the Hawthorn Formation in Georgia. This large tooth would likely have come from a super-sized Megalodon shark that was over 50 feet long.

Megalodon was not only the biggest and baddest prehistoric shark that ever lived; it was the largest marine predator in the history of the planet. Today’s great white sharks would be a mere bite size snack for this monster. It terrorized the diverse ocean waters around the world from 15.9 to 2.6 million years ago (late Oligocene to early Pleistocene). This massive, extinct species of shark was estimated to grow to nearly 60 feet in length and has often been declared the greatest vertebrate predator which ever lived.

These mega-tooth sharks were a giant and more robust version of the great white. They had 276 teeth in 5 rows and like todays sharks shed their teeth throughout their lifetime. The largest Megalodon teeth on record reached a stagger 7.5 inches (190mm). Compare this to the largest great whites who’s teeth top out around 3 inches long. Wow.

You can purchase Fossil Megalodon Teeth from Fossil Era. Prices range from $25 for the small ones up to $1,795 for the biggest and best specimens that include a display stand.

The American company Fossil, mostly known for their watches, has come up with a timepiece that will connect to your iPhone, Android or other Bluetooth smartphones.

When carving up a jack o’ lantern, making the teeth look right is always hard. No matter what I do, I just can’t get them to stand out and look cool like I picture them in my mind. Perhaps it’s because they match the rest […]

The dinosaurs couldn’t protect themselves from extinction but they can protect your furniture with the Dinosaur Fossil Coasters. Featuring designs that could be marketed as literally taking millions of years to create, these alder wood coasters feature a different dinosaur fossil from four different time […]

Don’t need gadget bling like Multimedia OLED Wristwatch? Don’t want to be late again due to the fact that you forgot how to read the time on your 1000100101 Black? Wait a minute – are you actually considering buying a watch to be able to […]

Wade is the name of this oversized retro looking watch from Fossil, featuring a symmetrical case on a deep black leather strap.

It doesn’t take an archaeologist to dig this cool mug. This T-Rex Fossil Mug looks like a T. rex fossil and has a dimensional skeleton on the body of the mug, while the tail bones form the handle. Perfect for anyone who is a Tyrannosaurus […]

Technabob is absolutely right when he writes: You can always count of Fossil to crank out some über-cool wristwatches. The face of the beautiful Ana-Digi model features both an analog and a digital watch, where the analog hands overlap the digital half of the watch. […]