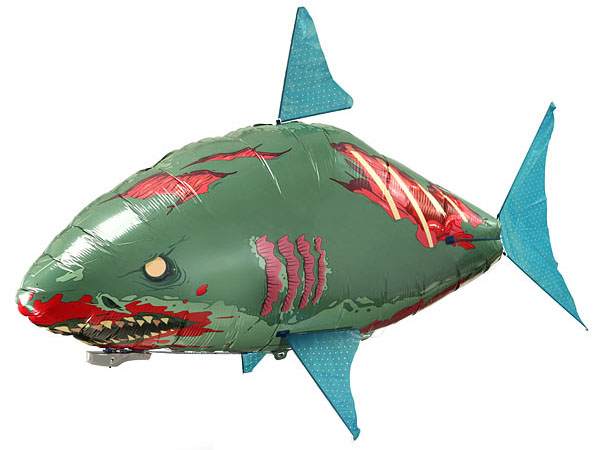 The first time I saw an Air Swimmer remote-controlled toy in action, it was the clown fish version and I was thoroughly impressed. I thought, “Finally, a remote-controlled toy that won’t knock someone in the head or make a suicidal dive towards the floor!” Plus, it’s bigger than big and kind of looks like a mini Hindenburg for your home, minus the explosion.

Well, Air Swimmers didn’t stop production with only the Flying Bass, Clownfish and Great White Shark blimps. They realized that sharks sometimes act like zombies and are also into taking a bite out of humans, so they came up with the Air Swimmer RC Zombie Shark that’s poised to attract the zombie-crazy crowd. 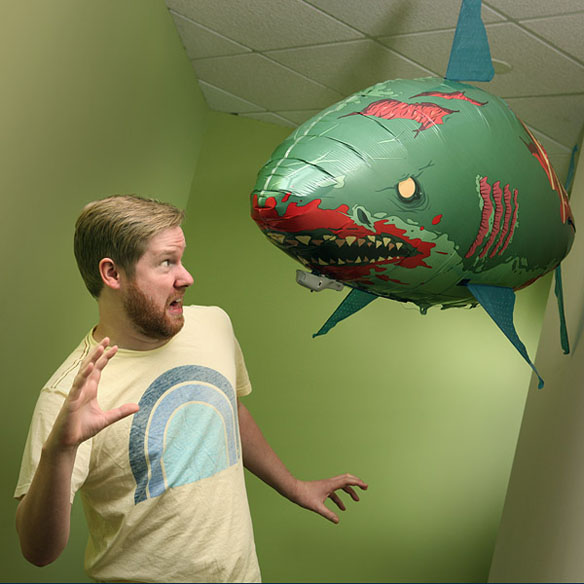 Uglier than sin, the zombie shark is decked out in the worst shade of green and has flesh wounds, exposed bones and blood all over it. The bottom side flaunts the shark’s sharp teeth for a more frightening effect. This one has double, if not triple the amount of teeth as the previous Air Swimmer shark.

So even though sharks are allegedly resistant to cancer, it seems that they haven’t managed to escape the spread of zombie-itis. Rumor has it that zombie sharks are the ones that chomp on surfboards, too.

The zombie shark moves very slowly like a stalker or like creepy sharks in shark films. This effect is useful if you’re using it to sneak up behind someone. Check out the following video to see the zombie shark hard at work. You’ll also appreciate how its slow speed helps you avoid knocking things over.

The Air Swimmers RC Zombie Shark is $39.99 at ThinkGeek.com. Don’t forget to stock up on AAA batteries.

Fish, sharks and blimps, today is our lucky day! We all love sharks, when we’re not in the water with them, and blimps are one of the coolest indoor party toys around.  So when Air Swimmers combined them to give us the Air Swimmers Shark […]

The flying fish are coming. This Air Swimmers Remote Control Inflatable Flying Bass will have people doing a double take. Get your bass in the air and fly it high with all of the life-like movement of a real Bass fish with a hook and […]

Depending on how much you use your iPhone, a juice pack might be a good thing to lug around. The new Mophie Juice Pack Helium is made to function with the iPhone 5, and it’s very slim, 13% slimmer than their Juice Pack Air, which […]

When carving up a jack o’ lantern, making the teeth look right is always hard. No matter what I do, I just can’t get them to stand out and look cool like I picture them in my mind. Perhaps it’s because they match the rest […]