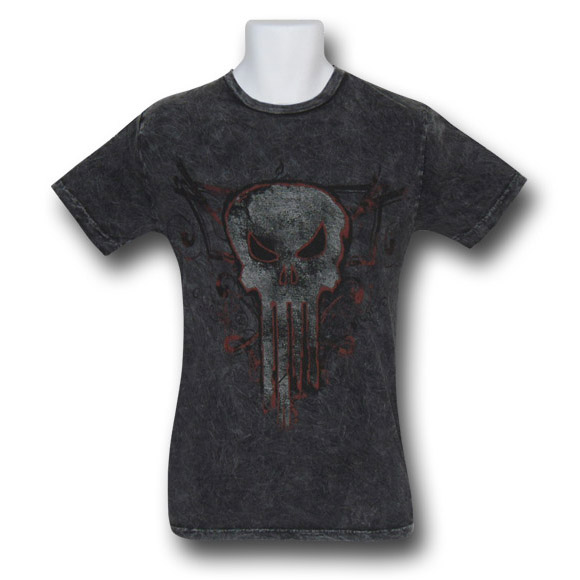 When it comes to comic book anti-heroes, nobody can hold a candle to the Punisher. Well, maybe you could but he’d probably punch you and stuff the candle up your nose. Now you can safely honor the uber-soldier’s awesomeness with the Punisher Symbol Acid Wash T-Shirt.

The Punisher has an awesome arsenal but his wardrobe is a little lacking. A skull on a plain black outfit? Slightly intimidating but very boring. Spice things up by adding a distressed look and some red line work to the famous skull logo and then slap it onto an acid-washed shirt that has a swirling smoke pattern on it and you have a well-armed vigilante loaded with style. Considering the tough guy’s methods, you can consider the red as the blood he spills and the smoke pattern can be a symbol of the Armageddon-like destruction he occasionally wreaks. The shirt is made from 100% cotton because even tough guys like to be comfortable.

Make sure you’re properly outfitted with the Punisher Acid Wash Symbol T-Shirt for $19.99 from SuperHeroStuff.com.