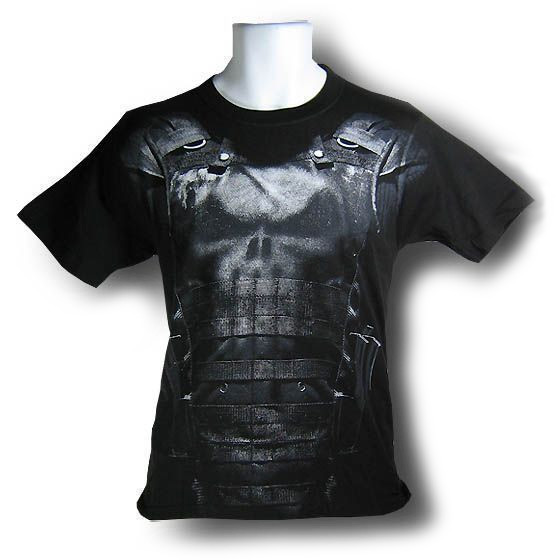 We’ve seen some really cool costume t-shirts in the past such as the Doctor Who, Darth Vader, Stormtrooper, R2-D2, and Chewbacca ones. While they were awesome, they were more on the geeky side. On the other hand, this Punisher War Journal Body Armor T-Shirt is totally badass.

This is the Punisher Body Armor t-shirt, straight from the 2nd Punisher movie…. actually the third Punisher movie. Only one of the baddest, grittiest movies to hit 2008; Punisher War journal. This shirt has been flying off the shelf, and it’s not just being grabbed up by radical Muslims either!  Get yours before it’s too late.

I really want one of these Punisher shirts, but unfortunately at the moment the only size available is small. Here’s hoping the other sizes (medium, large, XL, and XXL) are restocked soon.

Punisher War Journal Body Armor can be ordered for $19.99 from SuperheroStuff.com. This t-shirt is officially licensed by Marvel.

When it comes to comic book anti-heroes, nobody can hold a candle to the Punisher. Well, maybe you could but he’d probably punch you and stuff the candle up your nose. Now you can safely honor the uber-soldier’s awesomeness with the Punisher Symbol Acid Wash […]

Let’s face it, we all need to make a living and we all work for someone. Whether you have a cushy VP job on Wall Street, sell burgers at McDonald’s, or work for some crime syndicate, there are inherent dangers all around us. Occupy Wall […]

This awesome Legend of Zelda Premium Journal will let you write down all of your adventures in a beautiful journal that is as much decoration as it is functional journal. The end papers even feature a map of Hyrule and it has an elastic band […]

Normally you shouldn’t judge a book by its cover, but in this case , it is all about the cover. This Chain Mail & Leather Blank Journal lets you go all medieval with your journal. This awesome pocket journal is covered in leather and chain […]

Fans of the Marvel Comic Punisher will appreciate this Marvel Comics Punisher Bottle Opener. The Punisher himself would approve. It’s the perfect bottle opener to go with that Punisher shirt you love to wear. This solid metal bottle opener is created in the shape of […]