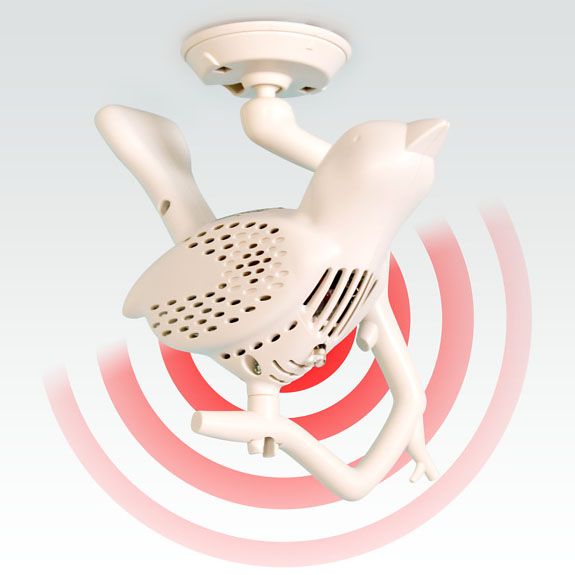 Most of the smoke detectors installed in offices and malls and other establishments mostly look the same: round, with some slots, but mostly ominous looking. They’re also mostly simplistic and minimalist, but if you’re looking for something different (and something definitely livelier), then you might want to consider getting the Chick-a-Dee Smoke Detector.

At first glance, the Chick-a-Dee Smoke Detector might look more like a speaker (that you’ve attached to your ceiling in the middle of the room) but it’s definitely a clever and funner way of installing a smoke detector in your home. But if you’re looking for a smoke detector that can work twice as hard, then the Smoke Detector Surveillance Camera might just be the thing for you. Aside from alerting you when it detect smoke, it also doubles as a surveillance camera.

It’s a question that obviously vexed the creators of the award-winning Chick-a-Dee Smoke Detector because this delightful looking smoke sniffer looks just like a bird on a twig.

Ideal for kids’ bedrooms but perfect for any room in your home, the Chick-a-Dee is inspired by the real life Chickadee, a bird famed for its noisy warning call. The difference is this whimsical looking lifesaver blasts out an 85db alarm signal the second it detects smoke.

The iPhone is an amazing, all-in-one gadget. The cable that comes with it? Not so much. It’s pretty bulky and can be a pain to take along, especially if you’re a frequent traveler or if you prefer things to be more compact, since the wire […]

This new spy gadget allows you to search for hidden cameras. It can detect the lens of any wired, wireless or covert camera from up to 50 feet away.

LEGO releases budget sets for various holidays that make excellent inexpensive gifts. For example, last Christmas they had Mini Santas, Christmas Tree, and Christmas Stocking sets for only five bucks each. Now to celebrate Easter and Springtime they have the new Bunny and Chick LEGO […]

Scosche Industries is an award-winning innovator of iPad, iPhone and iPod accessories and they set out to do two things with the Scosche RDTX Portable Radiation Detector for iPod and iPhone. First given the tragedy that struck Japan, they wanted to try to protect people […]

The London Science Museum has taken a new approach to the good ‘ol art of metal detecting by adding the technology to a radio controlled car.

Easter is a time for chicks. No, not those kinds of chicks. The fuzzy and cute kind. This Magic Chick Toy is super cute, fuzzy and yellow. Put one in the Easter basket of someone that you love. The Magic Chick Toy will whistle, chirp, […]