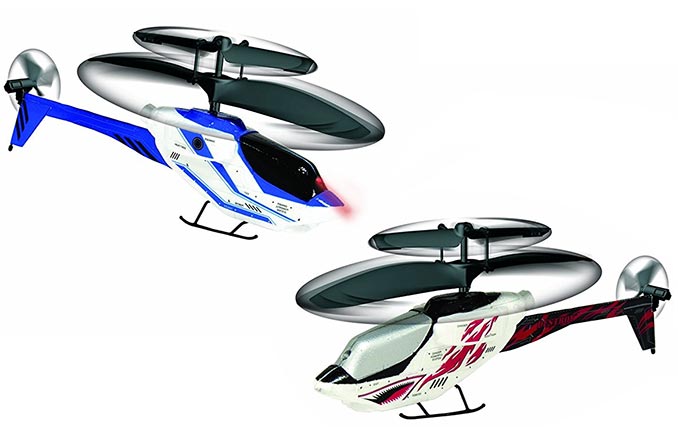 Picoo Z Sky Challenger ($121) is a new and improved version of the much talked about Picoo Z R/C Helicopter.

You purchase them is paris of two and use laser beams to temporarily disable the other chopper, accompanied by a sound effect.

Only 17cms long and weighing just 11 grams, these two tiny Sky Challenger Choppers are remarkably robust, and incorporate an auto stability system to make them easy to operate both indoors and outside in calm conditions.

Supplied completely ready-to-fly with pre-installed two channel proportional wide beam infra red control systems, each lightweight Lithium Polymer flight battery will provide flights of up to 10 minutes between charges driving two powerful micro motors, yet can be recharged in less than half an hour with the portable chargers provided.

A video showing the Sky Challenger helicopters shooting each other down:

Picoo Z, the brand known for its tiny radio controlled indoor helicopters, has now updated their line of choppers with three new models.

The Silverlit toy manufacturer has now released a pink version of their mega popular Picoo Z remote-controlled 2 channel indoor micro helicopter. Other than the color, the flying toy is exactly the same as the original Picoo Z helicopters. Here’s a video demonstration of the […]

XtremeMac, just announced three more innovative charging devices to go with their already impressive showing at CES 2012 in Las Vegas. The XtremeMac 3 in 1 USB Mobile Cable, InCharge Boost, and InCharge Micro Boost are the newest announcements from this leading manufacturer and designer […]

Remember the radio-controlled 3-channel Micro Mosquito that we wrote about last year? It has now been released in version 3.0, featuring orange LED eyes and an extra pair of legs. Utilizing patented twin rotor technology combined with a horizontal tail rotor and proportional radio control, […]

It wasn’t that long ago since three new PicooZ R/C Helicopters saw the light of day. Now yet another Silverlit micro chopper has been released. Currently touted as the world’s smallest remote control chopper, this marvel of micro technology will flatter even the crummiest of […]

This radio-controlled, zero gravity, mini racing car is introduced as “the next generation of upside down-driving vehicles” – a smaller version of those wall-climbing R/C toys you might have come across before. Believe it or not, this sporty little racer is capable of driving across […]

Yes, it’s another one of those cool palm-sized radio controlled flying toys – and once again with a design inspired by the world of insects, as with the R/C bee.