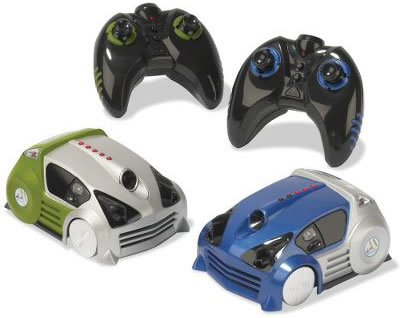 The Remote-Controlled Laser Combat Cars ($100) have infrared lasers that are fired by the handheld remote controls. The battle ends when one of the cars is hit ten times.

These remote-controlled cars have infrared lasers that are fired by the handheld remotes, allowing two users to engage in combat, or one of the cars can be switched to artificial intelligence mode, enabling one player to battle a microprocessor-controlled car. The remote controls use digital proportion trim to move the cars forwards, backwards, right, and left, including clockwise and counterclockwise pivots that allow you to turn quickly and fire at your opponent. During combat, the lasers are aimed by directing the front of the car at your opponent, and the lasers can be fired without limit, while each shot causes the laser cannon to recoil. The battle ends when one of the cars is hit ten times, and at the touch of a button, an invisible shield protects the cars from lasers for five seconds. Includes a boundary to contain cars during battle. Cars require six AA batteries each. Remote controls require one 9-volt battery each. 6 1/3″ L x 4 1/2″ W x 3″ H.

This radio-controlled car allows you to “paint” its path using a handheld infrared tracker – a feature that brought a lot of attention when the toy was displayed at the Hong Kong Toy Fair earlier this year.

Laser Tag combined with chess is nothing new. We’ve seen the power of the ancient Egyptians and their mastery of light and mirrors with the Khet Laser Game but the “best laser game of all time” just got a major upgrade. Say hello to the […]

These gorgeous Remote Controlled Bumper Cars ($40) are sold in sets of two. Simply pick your color, blue or red, and start challenging your friends.