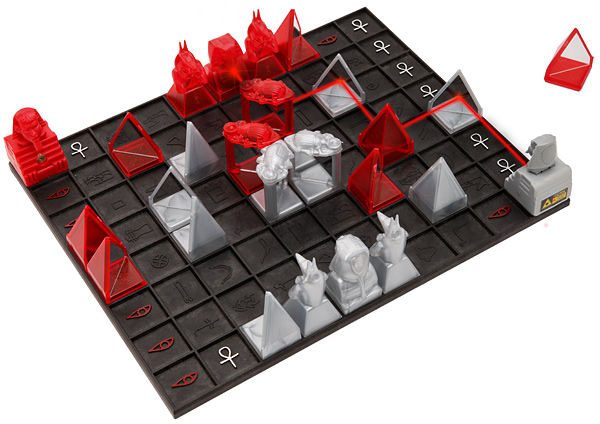 Laser Tag combined with chess is nothing new. We’ve seen the power of the ancient Egyptians and their mastery of light and mirrors with the Khet Laser Game but the “best laser game of all time” just got a major upgrade. Say hello to the Khet 2.0 Laser Game.

All the good stuff was kept in 2.0 so we still have the four types of playing pieces, with two of them having mirrors. We still win the game by striking our opponent’s Pharaoh with our laser… but the lasers are all new, adding an exciting twist to the game. This time around, instead of being mounted directly on the board, the lasers are built into special Sphinx pieces that sit regally in the corner. These aren’t ordinary Sphinxes though. They rotate so the angle of the lasers can now be changed. 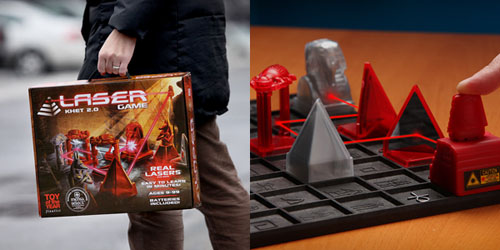 Aside from the new maneuverability with the laser, game-play remains the same – you fire the laser after your turn, bouncing the beam from mirrored piece to mirrored piece. Any non-reflective surface (with one exception) that gets hit by the beam is removed from the board. Win the game by mastering the angles and hitting the enemy Pharaoh.

Khet is a board game with four types of playing pieces, two of them equipped with mirrors. There are only there movement choices in the simple game, and the goal is to eliminate your opponent’s Pharaoh – by firing a red laser. Each side of […]

The .375 Caliber Bullet Space Pen not only looks really cool, it has some special features usually found only on very expensive pens.  The cap of the pen is made from an authentic H&H .375 magnum shell and this pen can write underwater, upside down […]