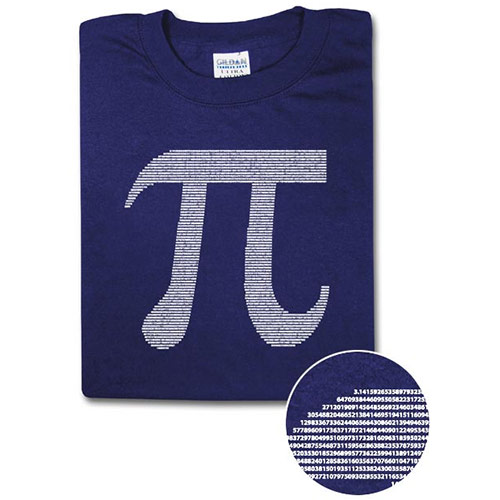 At GeekAlerts we’re real geeks, so we celebrate all the nerdy holidays like Pi Day.  Today, being March 14 (i.e. 3.14), is of course Pi Day 2013.  I’m pretty sure this means that you get to pinch (or punch?) anyone not wearing anything Pi.  If you’re wearing this cool Pi By Numbers T-Shirt, you’re definitely in the clear.  Not only does it have a large Pi symbol (i.e. the Greek letter π), the symbol is made out of the first 4493 digits of Pi.  That’s a lot of Pi! 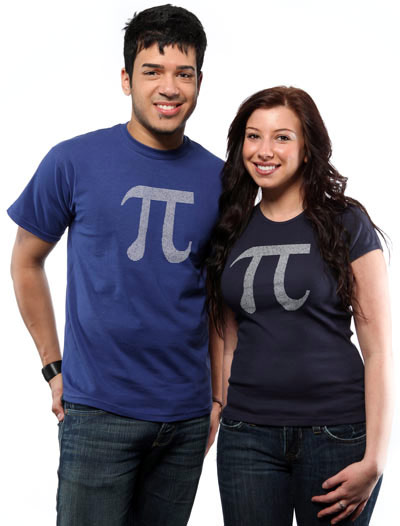 Metro blue 100% cotton heavyweight t-shirt with the Pi symbol on it. The first 4493 digits of Pi were used to construct the Pi symbol itself. That’s a whole lot of Pi. Enough for everybody to share so don’t get greedy on us now. A big shout out from ThinkGeek goes to Archimedes way back in the B.C. for finally giving us a good approximation of Pi, and doing so without the benefit of modern trigonometry. And thanks to the Egyptians and Babylonians for trying.

If you still need to buy that man in your life something special for the holidays, this Tokyoflash Kisai Space Digits Watch is sure to make an impression. Like all Tokyoflash Watches, this watch is limited edition and has some unique features. The futuristic time […]

Doctor Who by the Numbers T-Shirt

The Doctor Who by the Numbers T-Shirt, like the TARDIS itself, contains all the secrets of the Whoniverse. All? Okay, that might be stretching things a bit much but that’s okay because the Doctor lies, which means I can, too. However, there is some truth […]

The Justice League Strength In Numbers T-Shirt shows that five heads are better than one… although one can be incredibly effective if he has the ability to melt you with his eyes. Wonder Woman, Flash, Superman, Batman, and Green Lantern join forces when the forces […]

You know how you’re in the bathroom, doing your thing, and you’re just so bored because it’s taking a longer time than usual? You can do what most people do, which is read the labels off the back of toiletry and bath products in close […]

This Pi By the Numbers Heat Change Mug is a great way to memorize some of the many digits of Pi. It displays 3.14 when cold. When you fill it with hot liquid, Pi unfurls around the mug to 334 decimal places. Now you can […]

I love seeing how some people re-invent and recycle stuff instead of throwing them away or letting them rot in the attic, like old vinyl records. Artist Pavel Sidorenko did a good job with his stash of vinyl records by creating a whole bunch of these […]