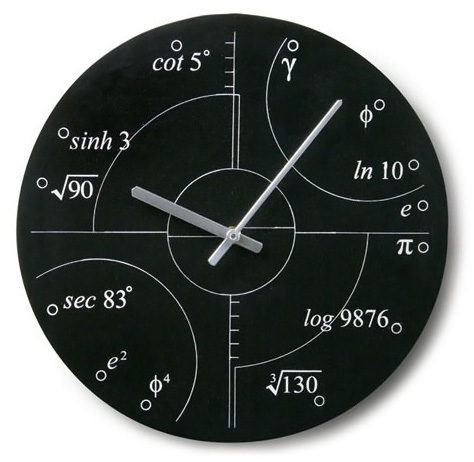 In math, irrational numbers are those that can’t be represented by simple fractions.Two examples are pi and the square root of 2. Designed by a mathematician, for mathematicians (and others in the know, like engineers and scientists), this clock tells time in irrational numbers logically placed on a 360-degree circle. For example, pi (3.14159…) is just a few degrees past where the 3 would be on a regular clock face.

The Irrational Numbers Wall Clock falls into the same category as other brainiac clocks that we love on GA, such as the Chalkboard Pop Quiz Clock and its fraternal twin Math Equations Wall Clock, Chemistry Clock and the Time Tower Desk Clock, amongst many others. What do they all have in common? You have to be a total nerd to own one. It’s all about exclusivity, you see?

What makes this clock different is its complexity. Notice how the math problems are positioned a bit off from where the clock hours should be? That’s because none of the answers are as easy as Pi. (apologies.) The square root of 90 is 9.4868. Notice how it’s located a little past the 9 position. Very clever. Also notice how the problems are written in the same font as in school text books? Way to keep things real!

Most of us will still be looking at our digital watches or phones to figure out what time it really is. But having this clock is a way of saying, “To hell with the fastest way from A to B! I’m taking the scenic route.”

The Irrational Numbers Wall Clock can be found at Skymall.com for $39.95.

Do you have a lifeless wall that needs some color? Add depth, dimension and loads of color while designing your own configuration of squares when you have Square Root Wall Art. Add, subtract, multiply. Interactive art installation color blocks countless configurations in pollen, white, sprout, lobster, swoon, buzz, fog on DIY […]

This geeky clock has a series of math problems replacing the normal numbers on the clock face. If that sounds like fun to you, this Pop Quiz Math Equations Wall Clock needs to be on your wish list.  Adding to the coolness (or geekiness?), the […]

Fans of the Graph Paper Pop Quiz Wall Clock have a second choice, the Chalkboard Pop Quiz Math Wall Clock. It is basically the same, except that this one looks like math problems written in chalk on a chalk board, while the other one had […]

GeekAlerts has shown you some pretty tasty energy drinks in the past, but the RootJack Caffeinated Pirate Root Beer may top them all. Packed with vitamin C, these 12 ounce caffeinated root beer drinks will ensure you stay energized and scurvy free. Free from preservatives […]

All our other products for Pi Day this year have been things you wear, but there is plenty of other items that feature Pi.  In fact, one of my favorites is the Pizza Pi Cutter GeekAlerts posted about 2 years ago.  Another one I like […]

GeekAlerts has shown you a wide range of clocks in the past; from the educational Chalkboard Pop Quiz Math Wall Clock to the Steampunk themed Gears of Time Wall Clock. But if you’re looking for a clock to put a smile on your face as […]