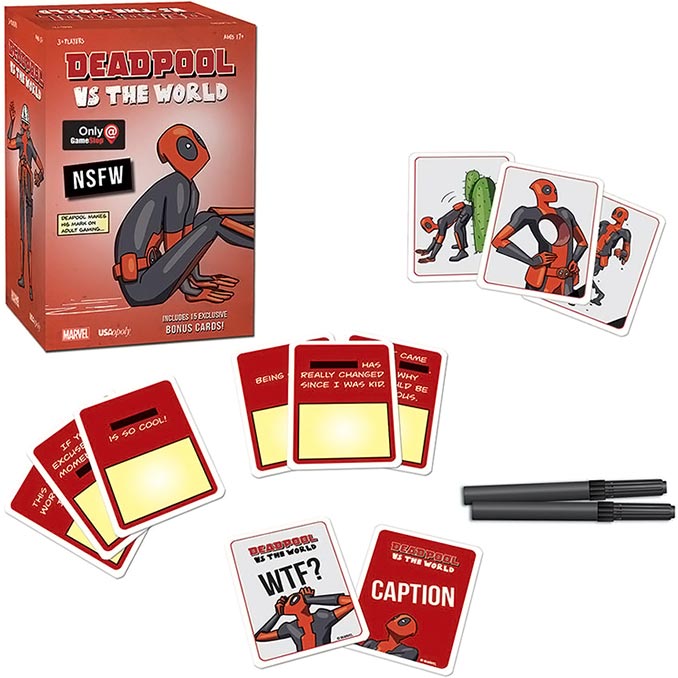 GeekAlerts brought you news of the Deadpool vs The World Game when it was announced, but coming soon there is an exclusive bonus version of the NSFW Deadpool vs. The World Card Game.

This new version is a GameStop exclusive, and features unique packaging. While the game is the same as the regular version with the same rules and features, this edition gives you 5 bonus illustrations (i.e. 5 extra WTF? cards for a total of 105) and 10 extra caption cards (for a total of 310).

Deadpool makes his mark on adult gaming in Deadpool vs the World, a hilarious party game for mature audiences. Featuring custom illustrations of Deadpool in very strange and unsightly situations, players face off against their friends by filling in the blanks on Caption cards to provide the most outrageous explanations of the Merc with a Mouth’s predicaments. The player who best describes Deadpool’s compromising situations wins the game.

NSFW Deadpool vs. The World Card Game is a GameStop exclusive and is priced at $29.99. Pre-order now, for an expected June 29, 2018 release date.

Deadpool 2 is coming out tomorrow, and while there are plenty of Deadpool shirts out there to choose from, this Deadpool Whoa That Seems Excessive T-Shirt is probably one of the best. It ranks right up there with other cool new Deadpool merch like the […]