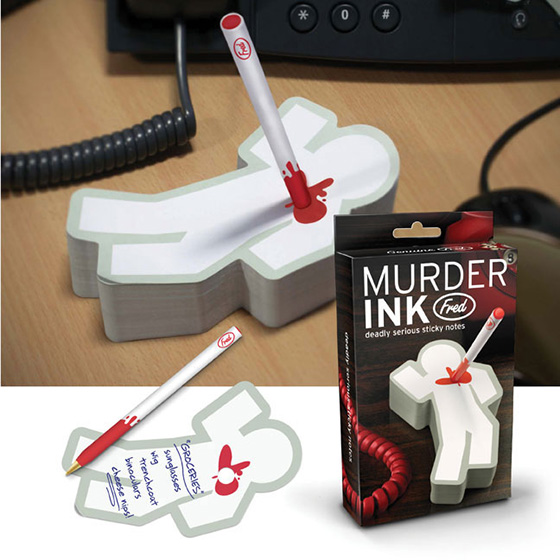 Crime scene and forensics material ranks high upon the “few of our favorite things” list at GA. But what we love best is when murder and humor are combined into one sensible product. Take for instance the Crime Scene Fleece Blanket, Geek Crime Scene Tape and Crime Scene Bandages. These all are useful things that also happen to create drama and suspense but most importantly, get a big LOL out of people. Now we have the bloody Murder Ink Pen and Paper Pad, basically a sticky notepad in the shape of a dead man. But here’s the cool part: the pen looks blood-stained and rests upright in the heart of the stabbed, bloody dead man note tablet.

Mind you, this product is not intended for young audiences due to its course nature and graphic violence. Viewer discretion is advised. But for mature audiences having a hard time getting their memos understood…(all you CSI, Sherlock Holmes or Dexter Morgan and Vince Masuka (bald Asian guy with a gangsta attitude) wannabes), you need to add this one to your lab bench.

If you want your flaky co-workers to go out with you for coffee or on lunch break, leave them a note on the dead man and watch them show up right on time. If someone has done you wrong, you don’t need to write anything..just stick a dead man note somewhere highly visible. If that doesn’t work, try adding some Medieval Pushpins (the axe), to effectively get your point across. Bribe or threaten.

The Erasable Memo Pad and Pen is the perfect desktop accessory to get when you (or your office) wants to begin going paperless. This silicone-made duo will become your new re-usable best friend: just jot down messages, phone numbers, reminders, quotations, and all sorts of […]

Whoever is in the think tank of Fred & Friends has hit the multi-tasking nail on the head with this set of Dine Ink Pen Cap Utensils. Taking after the classic Bic ball-point pens we know and love, the pens in this set come with […]

We all know the power of social networks these days. Millions of people check their Facebook daily and post hundreds of millions of status updates and posts each day via their Twitter accounts. However, if you want to someone a more private and concrete sort […]

Let’s save the earth one pen at a time, shall we? At least that’s the idea behind the T&T Pen-ink Chamber that was designed by Han Chi-hoon, Kim Yeon-soo, Park Byong-gon & Kim Sung-geun as their official entry to the iF Concept Design competition.

While the Dream Chaise Lounge Chair offers total comfort and relaxation, the modern styling might not complement the feng shui of your garden. However, the aesthetics of this Cricket Forge Leaf Bench and Table Set should allow for perfectly balanced qi. Or maybe they just […]

True Whovians love the goodies and gadgets associated with the quirky Time Lord but the best Doctor Who swag does more than just look cool; it’s useful too. The 11th Doctor’s Diecast Sonic Screwdriver nabs the most useful prize by being an actual screwdriver but […]