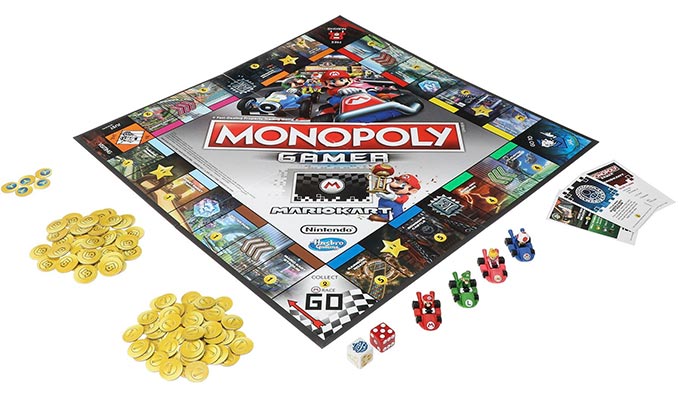 It includes 4 character tokens (Mario, Luigi, Princess Peach, and Toad) and includes 16 properties such as Rainbow Road and Bowser’s Castle. Win the game by having the highest score when the final race ends.

This sequel to the Monopoly Gamer board game joins forces with Nintendo Mario Kart characters and elements. Move around the gameboard as Mario, Princess Peach, Luigi, or Toad; buy iconic Mario Kart properties such as Bowser’s Castle, and Rainbow Road. Pass Go to trigger a race from Mario Kart Cup, dodge banana peel tokens, toss shells, and collect Coins. A Super Star space activates special abilities and rolling the Power-Up Die adds a special boost. Winning in this game is all about winning races! Who will end up with the coveted Grand Prix card? When the final race is over, the player with the highest score wins.

Monopoly Gamer: Mario Kart is currently on sale at GameStop for $23.99, which is 20% off the regular price of $29.99. It is also available at Think Geek and Game.co.uk.

Monopoly is a favorite among board game fans and now you can enjoy it with a Nintendo twist. The Nintendo Monopoly Gamer Collector’s Edition Game joins Monopoly with beloved Nintendo video game characters. Earn points by buying properties, collecting coins, and beating bosses. Play as […]

Forget those generic power toys; let your little ones take on ride on the Motorized Ride On Mario Kart. This real-life Mario kart supports kids up to 55 pounds, allowing the rider to experience a little of the Mario Kart fun we grew up with. […]

Bring the thrill of the race from the screen to real life with this Super Mario Mario Kart Wii Die-Cast Vehicle 5-Pack. This set will be hours of fun for your kids. You get 5 Mario Kart Wii video game characters: 1 die-cast kart of […]