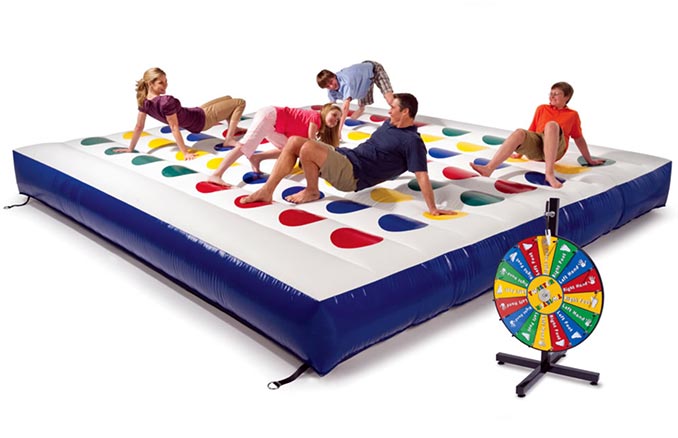 Memorial Day weekend is here, which for many people means backyard barbecues or picnics at a park. Maybe you’ll toss a frisbee or throw around a football, but imagine how much fun this Giant Inflatable Outdoor Twister Game can be (especially after knocking back a few beers). It’s huge, measuring 15 feet long and wide and 15 inches high. It’s made for up to 10 players and supports up to 1,500 pounds.

All told, it has 64 colored dots: 8 rows of 8 dots each. It comes with a large 3 foot high wheel that you spin each turn to determine a color and which hand or foot has to touch it. A 1 horsepower air blower is included to keep the giant game “board” inflated while you play.

This is the inflatable outdoor game that challenges up to 10 players to touch different colored dots on a playing surface using only their hands and feet. Based on the popular game that originated in the 1960s, and built by a company that only manufactures products for the amusement industry, the inflatable 18 oz., double-stitched vinyl 15′ x 15′ playing mat is comprised of 64 colored dots arranged in eight rows of eight dots each. An included 24″ diameter, 3′-high wheel spun at the beginning of each turn indicates which hand or foot players are to use and what color dot to touch. Contortions and human pretzel poses aside, no other part of the body may touch the playing surface; the last player to remain “standing” wins. A 1-hp air blower that keeps the playing surface inflated plugs into AC. Supports up to 1,500 lbs. 15′ L x 15′ W x 15″ H. (125 lbs.)

Apparently this isn’t from Hasbro, because the official name doesn’t have “Twister” in it. Instead it is called the Inflatable Outdoor Color Dot Game, and it is sold exclusively at Hammacher Schlemmer. It costs $2,000. If you like mega-sized games but don’t have that budget, check out the Giant Outdoor Dice.

Although they aren’t any where near as impressive as this, there are much cheaper options for playing twister outside. One is the Giant Get Knotted Inflatable Game for $74.99 at School Specialty. It has a 10 foot plastic playing mat and two giant inflatable dice. Another is the Lawn Twister Game Set for $14.99 at Target. It comes with 25 game pieces that you individually stake into the ground.

Introducing the Turd Twister…because it’s been a while since we’ve had a really funny WTF Product.  Just like the Playdoh Fun Factory we all loved as children, which uses extrusion to create spaghetti and other cool shapes, The Turd Twister applies that same extrusion technology […]

Get ready for this year’s big Halloween bash in style with the Inflatable Skeleton Cooler. This thing is over two feet tall and almost four feet long…big enough to take a quick-rinser in if you need to shake the Halloween party cobwebs out of your […]

Love taking control of the wind and cutting through the waves, but don’t have a truck or van that can tote a conventional windsurfer? The Inflatable Windsurfer and Sailboat lets you have all the water fun you can handle, and you only need a vehicle […]

Warcraft fans stand up and let everyone know that you want an inflatable donkey…relax, it’s okay, it’s the Dota2 Inflatable Donkey. Sure to make inflatable fans everywhere jealous, this donkey stands three feet tall when fully inflated and is the perfect accessory for the geek […]