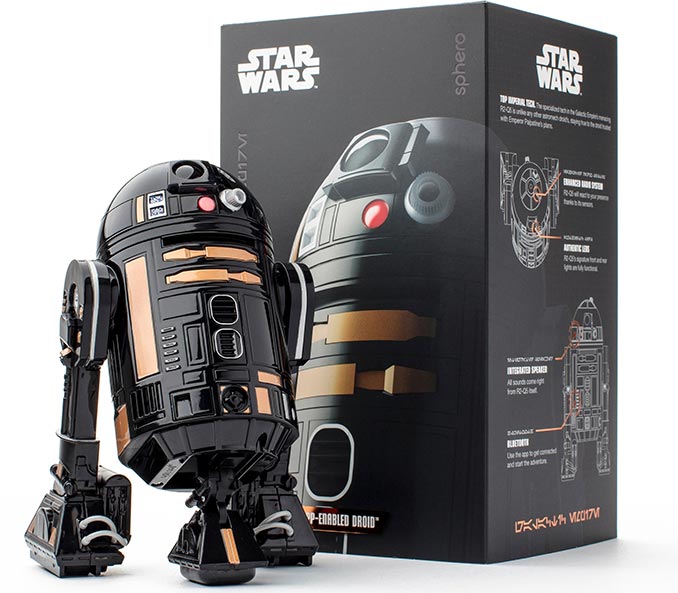 While everyone knows R2-D2, not as many people are familiar with another R2 series astromech droid, R2-Q5. You may not remember, but R2-Q5 was on the Death Star II in Return of the Jedi. He basically looks like a black edition R2-D2. With this Sphero Star Wars R2-Q5 App Enabled Droid, you can own your own life-like interactive R2-Q5 droid.

This Sphero R2-Q5 Droid features authentic movement and has full-functional LEDs to accurately recreate the front and rear lights. Further, it has a built-in speaker to play lifelike droid sounds. The real magic happens when you connect it to your smartphone (Apple or Android) via Bluetooth to enable wireless control and an augmented reality feature.

This little droid has sensors so it can react to your presence. It can even watch Star Wars films with you and express his reactions.

Rule your own Galactic Empire with this Sphero R2-Q5 app-enabled droid. It connects to a smart device via Bluetooth for wireless control and access to its augmented reality feature, and it produces lifelike droid sounds via its built-in speaker. Watch Star Wars films with this interactive Sphero R2-Q5 app-enabled droid and hear him express his reactions.

Sphero makes really cool app-enabled robots that can race, do  tricks, and all kinds of fun things. In addition to products like Ollie and Sphero Mini, they also have licensed products like Star Wars droids, Marvel Spider-Man, and Disney-Pixar Lightning McQueen. Right now you save […]

Have a ball with the Star Wars The Force Awakens BB-8 App-Enabled Droid, and feel like you’re taking part in the adventures that happened a long time ago, in a galaxy far, far away. When this cute little ball-shaped droid first appeared, some thought he […]

There are plenty of Bluetooth speakers to choose from to stream music from your smartphone, but they don’t have a cool pixel display like this LED App Bluetooth Speaker. Install the iOS or Google app on your iPhone or Android smartphone and you can control […]

Calling all geek guys. If you’re still drawing a blank on what to get your lady this Valentine’s Day, there’s an App for that. The Pandora App for iPhone features beautiful images of Pandora jewels up close and personal, their prices, and how to get them. The Pandora […]