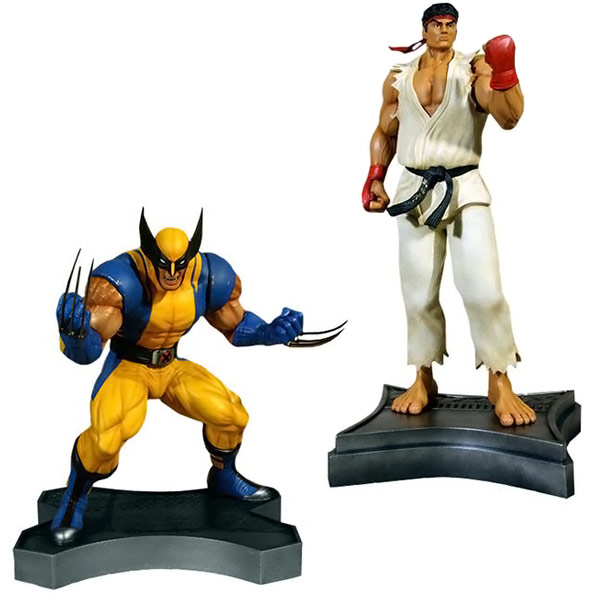 Comic geeks clash with gamer geeks with the Marvel vs Capcom 3: Wolverine vs Ryu Epic 1:3 Scale Statues, as two of the toughest characters in their respective worlds cross over to see who can hand out the biggest butt-kicking.

In both comic books and movies, Wolverine is a fan-favorite, with his mutant healing factor and adamantium claws making him a lethal force to be reckoned with.

Ryu is a skilled martial artist that’s been kicking butt and taking names since he appeared in the very first Street Fighter video game.

Both statues are constructed from heavyweight polystone, with Wolverine, who has real metal claws, measuring 21 inches, and Ryu measuring 26 inches. Both characters have similar MvC3-themed bases so they match if displayed together.

The Marvel vs Capcom 3: Wolverine vs Ryu Epic 1:3 Scale Statues will be available August 30 but can be pre-ordered now for $999.95 at Amazon.com.

This Capcom Red Mega Man Helmet is Mega Man’s classic helmet in a red color. Even Mega Man likes a change once in a while. It comes with LEDs and foam padding. It is perfect for cosplay or display and makes a great gift for […]

School is in session for the original students of Xavier’s School for Gifted Youngsters with the Marvel Classic Characters Original X-Men Statues. For those who are only familiar with the original X-Men through the movies, I regret to inform you the roster won’t match up […]

Combine Street Fighter with the cuteness of Hello Kitty and you have a winning combination. These Street Fighter X Sanrio Plush toys are all kinds of cute. And they kick butt. They come in Ryu, Chun-Li, or M. Bison versions and stand 5-6.5 inches tall. […]

Can you believe that it has been 25 years since Street Fighter was released? This Street Fighter 25th Anniversary Chess Set is a great way to honor the game. This set comes with silver and pewter-colored resin chess pieces of Ryu, M. Bison, Chun-Li, Juri, […]