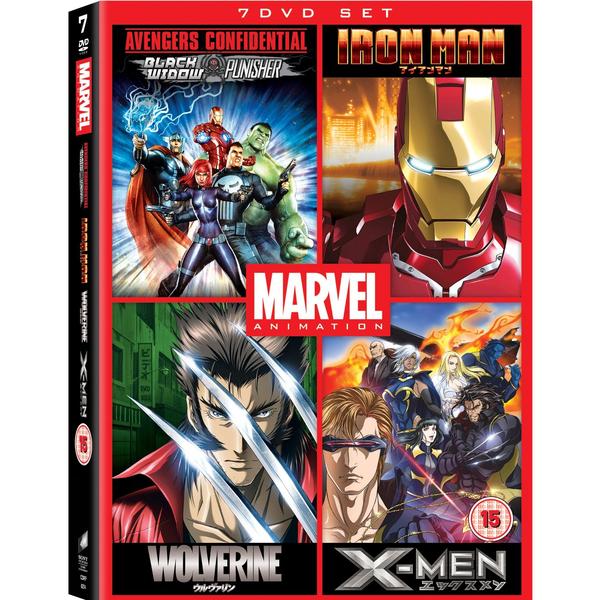 Grab some popcorn and settle in for a wild ride. This Marvel Anime Boxset will have you busy for a while. It is an awesome collection of the anime series based on the Marvel Comics characters.

This set is packed with the action you would expect from Marvel. It is a 7 DVD box set that has something for everyone whether you are an Iron Man fan, a Punisher fan or an X-Man fan.

In ‘Iron Man’, Tony Stark (voice of Adrian Pasdar) travels to a power station in Japan where a special type of armour is being developed to replace him when he retires.

The episodes are: ‘Japan’, ‘Going Nuclear’, ‘Reap the Whirlwind’, ‘A Twist of Memory, A Turn of Mind’, ‘Outbreak’, ‘Technical Difficulties’, ‘At the Mercy of My Friends’, ‘Daughter of the Zodiac’, ‘A Duel of Iron’, ‘Casualties of War’, ‘The Beginning of the End’ and ‘Endgame’.

In ‘X-Men’, Professor X (Cam Clarke) and his X-Men embark on a journey to Japan to confront the U-Men who are abducting young mutants and harvesting their organs.

In ‘Wolverine’, Logan (Milo Ventimiglia) learns that his girlfriend Mariko (Gwendoline Yeo) has been kidnapped by her father Shingen (Fred Tatasciore) and taken to Japan to marry a suitor of his choice. As Logan plans to rescue his love he must face Shingen’s men and obstacles put in his way.

When the Punisher (Brian Bloom) makes a mess of a mission he has been assigned, Black Widow (Jennifer Carpenter) is dispatched to retrieve him and bring him back to S.H.I.E.L.D. headquarters. There, director Nick Fury (John Eric Bentley) briefs the duo on an even more important mission: to prevent the terrorist group Leviathan from making use of stolen S.H.I.E.L.D. technology. Can the Punisher redeem himself and help foil the plot?

This amazing set is only £13.99 from Forbidden Planet. It is a perfect Christmas gift.