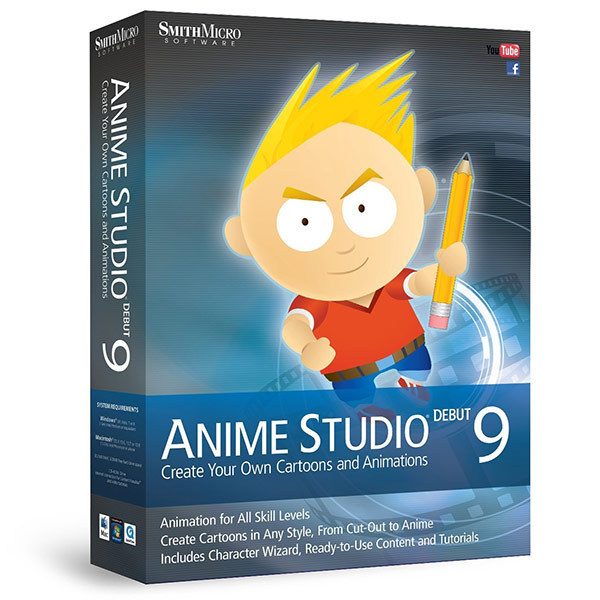 Have you ever wanted to make your own cartoons? It’s easy to make high quality animations quickly with Anime Studio Debut 9 Software. Even if you’re a beginner, it is super easy to get started because there are detailed video tutorials that show how to use the various tools. Plus there is pre-made content and characters allowing you to start making animations right away.

Anime Studio Debut 9 has many tools that make creating cartoons easy and fun, starting with the Character Wizard. It allows you to quickly design your own characters and animate them. Another built-in feature is video/motion tracking, which allows you to follow the position and rotation of an object. Automatic lip-syncing automates the normally monotonous process of synchronizing a character’s lips to the words being spoken. There are even easy-to-use video effects as well as sound effects.

Anime Studio Debut 9 Software is available for free after $40 rebate at Newegg.com. (Must be ordered by November 26, 2012 to qualify for the rebate.) It comes with free shipping too! If you don’t like dealing with rebates, you can also buy Anime Studio Debut 9 for only $20 at Amazon.com.

Grab some popcorn and settle in for a wild ride. This Marvel Anime Boxset will have you busy for a while. It is an awesome collection of the anime series based on the Marvel Comics characters. This set is packed with the action you would […]

Here’s a hoodie fit for a mage, wizard or whatever Gandalf is calling himself these days. If you are going to cast spells, you may as well look good doing it. This cutting edge Technomancer Digital Wizard Hoodie will allow you to cast 10 different […]

Dotklok is the name of this cool open source digital clock that is capable of displaying the current time with many different animations, such as numeric, graphic and abstract. There’s even a Pong mode, if you’re into retro games. The motivation for DOTKLOK was to […]

Water Wizard Buddha Board for Kids

Want to give your child the best toys while still staying true to your pro-environment stance? It doesn’t have to be one or the other anymore, not with the Water Wizard Buddha Board for Kids.

These Wizard of Oz Plush Toys are really cute and cuddly, with a unique retro style. Being geeks most of us probably don’t identify with the scarecrow, who feels he lacks brains, but some may share a kinship with Dorothy, the Scarecrow, the Tin Man, […]