SAVE BIG on Recertified or Open Box Printers 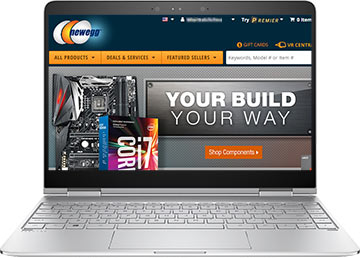 Newegg.com has long been a favorite online shopping site for buying computer components, electronics, and other geeky gadgets. It is great for geeks who build and upgrade their own computers, but everyone including non-eggheads can enjoy the immense selection of HDTVs, iPods, cell phones, digital cameras, laptops, and other devices that everyone uses these days.

Newegg, whose name means “new beginnings,” was founded in 2001 by a Taiwanese immigrant to the United States. Internet Retailer Magazine named Newegg.com one of the top 10 retailers in 2005. Gamers will probably know this favorite shopping destination as the sponsor of PC gaming tournaments for Rome: Total War, Warcraft III, and Counter-strike, among other video game titles.  It’s no surprise, then, to learn that this online store stocks numerous gaming systems, including Gamecube, Nintendo DS, Nintendo Wii, Playstation 2 (PS2), Playstation 3 (PS3), Xbox, PSP, and Xbox 360. They carry video game consoles, video game console accessories, PC games and accessories, and Mac games.

This company began as a simple online retailer of computer hardware and software. Although the store has since dramatically expanded its offerings, tech savvy customers can still shop a wide array of notebooks, netbooks, desktops, tablet PCs, and all-in-one PCs from popular manufacturers like HP, DELL, Asus, Acer, Lenova, and Gateway. In the software section, you rocket scientists will have plenty to choose from, in categories like academic, business and finance, and digital media editing. Get software for your PC or MAC from trusted developers such as Adobe, Corel, Encore, McAffee, Microsoft, and Apple.

Smart shoppers will have a chance to comparison shop among a plethora of cell phone options from all of the major providers (Sprint, AT&T, T-Mobile, and Verizon Wireless) and major brands (Blackberry, Motorolla, Palm, Sony Ericson, Pantech, etc.). Looking for a new cell phone, android phone, window phone, touch screen phone, PDA or smartphone? You’ll find it in the cell phone department of this website.

A famous geek T-shirt reads, “If at first you don’t succeed, call it version 1.0.” Well, you’ll have no trouble succeeding in finding what you need at this online store, because the site lets you shop by category or brand, offers product tours, and outlines product specs. Hey, they’ve even got an icon glossary to explain the wealth of product information contained on each page of the website. You gotta love that.