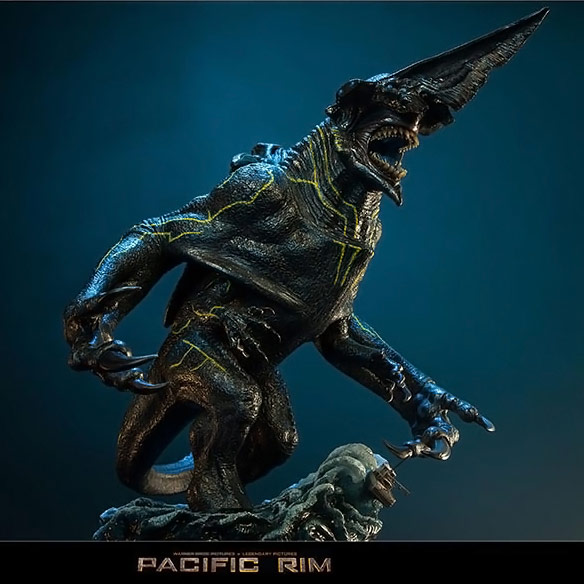 When facing a terrifying monster, your first instinct is probably to run away but you’ll change your mind with the Knifehead Pacific Rim Statue because this beast doesn’t want to destroy cities; he just wants to go home with you.

Pacific Rim has everything you could possibly want in an action film. There’s giant robots, giant and weird monsters, and destruction of cities on a level that hasn’t been seen since Godzilla decided to redesign the skyline of Japan, and now it’s possible to claim one of these prehistoric-style home-wreckers as your very own.

Knifehead, the first statue in the Pacific Rim collection, is a great way to get things going because everything about this guy screams death and destruction, with the highly-detailed, limited-edition statue featuring his imposing headblade, four sets of razor-sharp claws, and a boat that happened to be at the wrong place at the wrong time.

If you want a Kaiju of your very own, the Knifehead Pacific Rim Statue will be available April 2014, but it can be pre-ordered now for $379.99 (or for as little as $68.40/mo) at Sideshow Collectibles.

The dealer of death pays his respects with the Frazetta Tribute Death Dealer Statue. Frank Frazetta created many eye-catching and iconic characters but the one that comes to mind first for many fans is the fierce Death Dealer, sitting astride his giant black horse, his […]