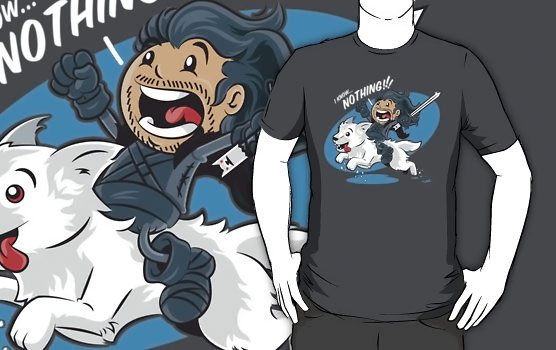 Jon Snow can be a bit of a Gloomy Gus but the Game of Thrones I Know Nothing T-Shirt offers a way for the troubled Crow to finally find a bit of happiness.

The shirt features a child-like Jon Snow riding his faithful direwolf, Ghost, as he proudly proclaims to the world that he does indeed know nothing.

You know you want to get your hands on the Game of Thrones I Know Nothing T-Shirt for $25 at RedBubble.com.

Let Jon Snow’s direwolf protect you. This Game of Thrones Ghost Direwolf Plush is adorable and super soft. Yet he will be fearsome to all who oppose you. A direwolf is nothing if not loyal. Who wouldn’t want a fierce looking Ghost in their home. […]

Season 2 is coming, so get in the spirit with this Game of Thrones Starks of Winterfell Crocheted Doll Set. This handmade set of Game of Thrones dolls includes 8 people and 3 direwolf puppies including Lord Eddard, Lady Catelyn, Jon Snow, two grey direwolf […]

This Game of Thrones: Stark Sigil Direwolf USB Flash Drive looks pretty amazing. It will be a great addition to your collection. Especially if you prefer House Stark to the other houses. It has a 64GB capacity and a strong alloy case with a necklace/keyring […]