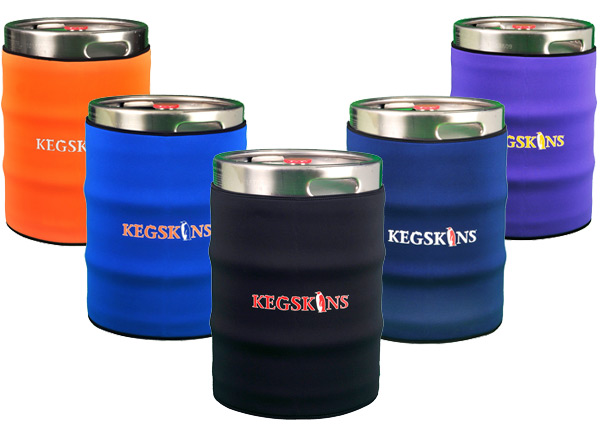 Getting a party rolling is easy if you have cold beer. However, keeping a keg of beer cold isn’t always easy. Sure you can use a keg refrigerator like the Alpina Beer Bar, if you can afford it and have electricity available. However, if you’re on a budget or having your party in a park, that won’t do. You’re left with buying 20 bucks worth of ice and trying to pile it on the keg. Now there’s a better solution, KegSkins Neoprene Beer Keg Insulators.

Just slip this over your keg, and it will keep it cold for hours. They actually had this tested in a lab, and the results are very impressive. After exposing a KegSkin covered keg of beer at 38 degrees to 80 degree temperatures for 4 hours, the temperature only increased by 4 degrees and was still a chilly 42 degrees. Another keg without the KegSkin rose by 16 degrees in the same period, becoming a not-so-tasty 54 degrees.

The KegSkin Classic will keep your keg cold for 5+ hours without the hassle and inconvenience of spills, bagged ice, and over-sized tubs. The KegSkin Classic is made from high quality, performance-tested, Neoprene that insulates your keg, ensuring that your beer stays cold for the duration of your gathering. The KegSkin will be a great addition to your next party and pays for itself after 2 uses!

Purchase KegSkins for $39.95 each directly from Keg-Skins.com. Customize your KegSkin with your own photo/logo for only $10 more.

Here’s a quick fact: women don’t really look too kindly on men with beer bellies. It implies that he does a lot of heavy drinking–which sometimes could be seen as irresponsible. But I doubt she’ll be looking at you any less kindly if you have […]

Do you love beer? How much? Enough to let the whole world know with this I Love Beer – Beer Bottle Knit Cozy? If you love beer that much, then display it proudly. It is not only a nice sweater for your beer, but it […]