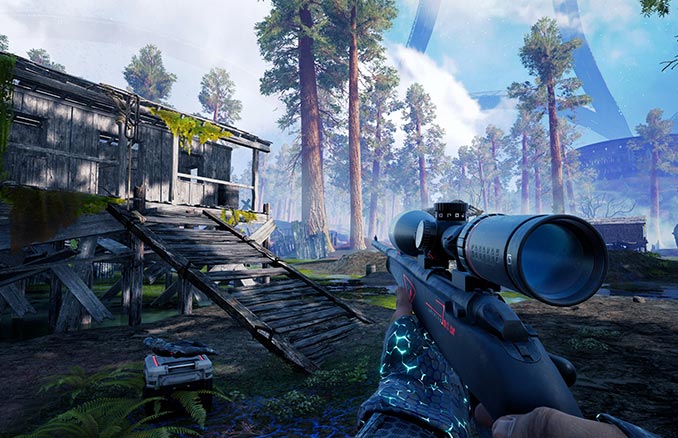 If you like Battle Royale games like Fortnite, check out this Islands of Nyne: Battle Royale Gameplay Trailer. It looks like the action is smooth, fast, and furious. What sets it apart from some of the other Battle Royales like PUBG and Fortnite is that it is a first person only game. Third person views allow you to “cheat” by peaking around corners, so it is nice to be able to enjoy first-person action without going up against third person players.

ION (short for Islands of Nyne) offers a unique sci-fi universe where you do battle in massive, alien-built arenas. Its goal is to be more skill-driven, so luck is less important in deciding the ultimate victor.

Drop into massive, alien-built arenas and begin the frantic search for weapons and gear – all while trying to stay one step ahead of the advancing plasma field… or the sights of other contenders. ION offers its players a skill-driven, first-person-only Battle Royale all built into a unique sci-fi universe.

A community driven First-Person-Only Battle Royale game with a core focus on fast-paced, skill-driven gameplay set in a sci-fi inspired universe where anything is possible. Drop in, find a weapon, and stay alive… for only 1 can emerge victorious. The rest must die!

Islands of Nyne: Battle Royale is three years in the making from the upstart independent developers at Define Human Studios. Launching on July 12th on Steam Early Access.

This Black Forest Cake Royale 2GB USB Flash Drive makes a cute gift for the girlfriend or wife, but I’m not sure you want to get it for them.  Think of all the cake cravings you are going to create and where will that lead?  […]

If you like massively multiplayer military battles, you may have already discovered War Thunder. It features over 800 of historically accurate planes and ground vehicles with a heavy focus on World War II era hardware. Now they’re finishing up their major addition of sea to […]