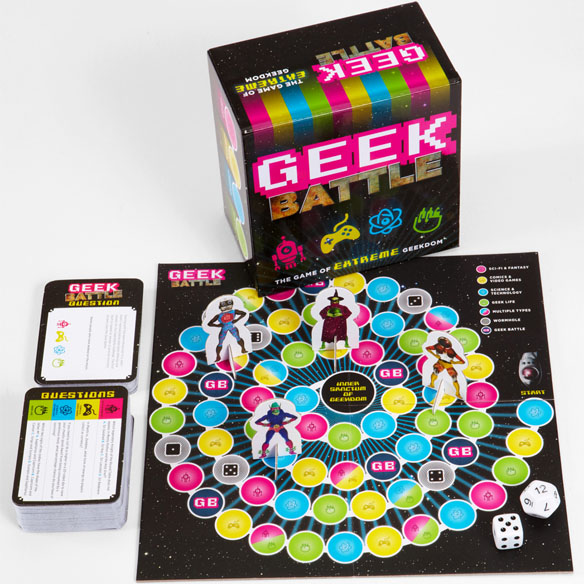 Now that we’re all out of the closet, self-proclaimed geeks, it’s time to weed out the quasi-wannabes from the real McCoys. Playing a round of the Geek Battle Board Game will reveal who are pure geeks to the core.

Geek Battle, from the developers of Cranium games, could be described as a game of Trivial Pursuit pumped with Fruity Pebbles, Dr. Pepper and algorithms. Each player gets to be some sort of alien creature that’s working its way to the “Inner Sanctum of Geekdom,” aka the Geek Hall of Fame. You’re not going to make it if you’re only good at math and science. Rather, you must be a well-rounded individual who knows a little bit about everything; superheroes, gaming, and role playing games. You know, a sort of Jack of all trades, Master of all that’s relevant to the universe. 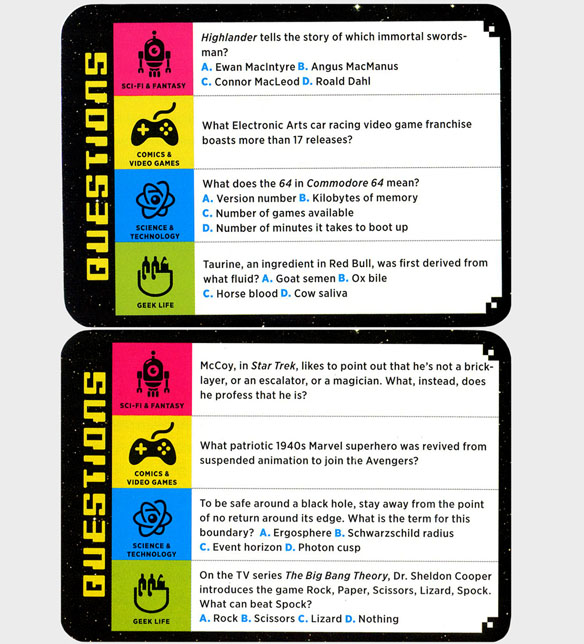 This game presents the ultimate challenge for all nerds, from D&Ders to techies. Players divide into teams to battle their way through rigorous trivia categories, including sci-fi, fantasy, comics, video games, science, and technology. The goal is to reach the Inner Sanctum of Geekdom, the crowning glory for every geek!

Geeks know battle. From LARP fights to video game galaxy battles to the war histories of fantasy realms, we know our stuff. Now there’s a way to flex those muscles in a more formal fashion than verbal throw downs at the lunch table! Geek Battle is “The Game of Extreme Geekdom” and it lives up to its name. Each of the 125 trivia cards has questions in each of 4 genres of geekery to challenge even the most knowledgeable of nerds (yes, we know there’s a difference). Includes: game board, 125 trivia cards, 50 Geek Battle Cards, 1 D12, 1 D6 and 4 player pieces. Battle on, Geeks! 5.5″ x 5.5″ x 3.25″

Invite your friends to get into heated match of Geek Battle. The game can be found for around $20 at FredFlare and at Amazon.

Other board games to play on Geek Game Night are Carcassonne, The Settlers of Catan, and Oh Gnome You Don’t!, just to name a few.

You won’t have to worry about looking like an Ancient One when you’re rocking the style dimension in these Doctor Strange Sanctum Sanctorum Leggings. Leggings like these are the reason the Mirror dimension exists in the world of Doctor Strange, because in the mirror dimension, […]

Doctor Who The Time Wars Board Game

Are you looking to add another board game to your collection? How about Doctor Who The Time Wars Board Game. Any fan of Doctor Who or board games in general will love this trivia based game that takes you back to the first season of the […]