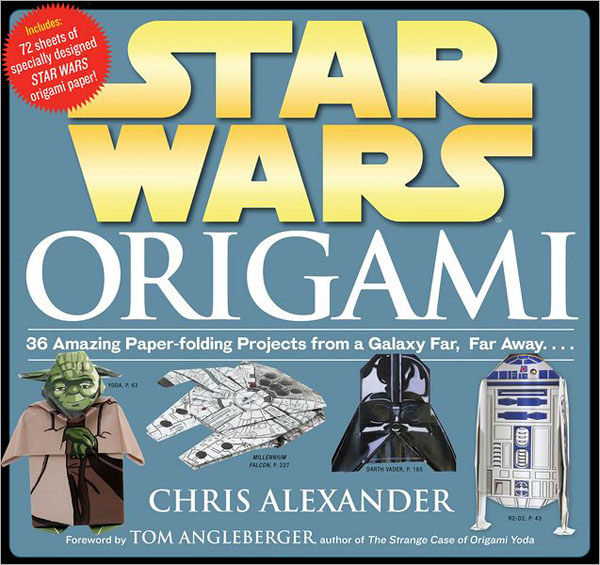 If you’re getting bored of making paper airplanes, perhaps it’s time to graduate to something more challenging. The Star Wars Origami Book will guide you through thirty-six awesome Star Wars paper projects that will blow your mind.

So if you don’t exactly have the funds (or the patience) to buy and put together the Star Wars LEGO Death Star, try and make the Death Star out of paper. Surely, it will cost fractions less and won’t take you nearly as many hours to complete. All you need is this book, some free time, and a stash of nice paper.

Star Wars Origami: 36 Amazing Paper-folding Projects from a Galaxy Far, Far Away….
Kids love origami—and what could be cooler than transforming a piece of paper into Boba Fett, Princess Leia, Yoda, or R2-D2? And not just any paper, but custom-designed paper illustrated with art from the movies. Star Wars Origami marries the fun of paper folding with the obsession of Star Wars. Like The Joy of Origami and Origami on the Go, this book puts an original spin on an ancient art.

Chris Alexander is a master folder clearly explains 36 models, which range in difficulty from Youngling (easy) to Padawan (medium), Jedi Knight (difficult), and Jedi Master (tricky!). A front section introduces origami definitions and basic folds. Bound in the back is the book’s unique folding paper, two sheets for each figure. Illustrated with original art, it makes each creation—the essential lightsabers, the Death Star, and much more—true to the movies.

If you want to gently introduce your kids into the wonderful world of Star Wars, origami is a good introduction and opportunity for family bonding. As cool as the movies are, they are a far cry from the stuff that the Disney Channel puts out there.

The origami book includes detailed, step-by-step instructions with illustrations for the reader’s ease. Also, the author adds interesting tidbits highlighting a particular character’s or a vehicle’s significance in the films. Chris Alexander has been at this origami thing since he was four, so you’re learning from the cream of the crop. Consider him the Jedi knight of origami.

Gakken, the Japanese company behind the Colorful Aqua LED Projector that was posted here at GeekAlerts yesterday, has released a DYI origami LED lamp.

My son recently discovered Origami and he has been making all kinds of neat 3D animals and objects. The artform goes back a long way and it seems like you could create almost anything you can dream of. Well, now you can bring Origami to […]

It’s a huge hassle sometimes to take your tot out for a walk in the park or with you on a shopping trip. And no, I’m not talking about having to bring along that huge baby bag filled with diapers and baby bottles; I’m talking […]

Are you looking for a cool sleeve for your iPad? The Origami Smart Sleeve For iPad looks like a good one. This good looking sleeve will protect your iPad and it also folds two ways to make a high angle or low angle stand. That […]

You can add a little artistic flair to keeping track of time with the Origami Clock, as a pliable polyethylene sheet is twisted and curled while the hands of the clock make their trek across the ABS dial. This particular clock is more about style […]

Unleash the hidden horror with Horrorgami, a 126-page book that lets you create numerous horror scenes from classic horror films and books. So you like Origami but you’re not into Pokemon or Star Wars paper art. Never fear, horrormeister, because this book has what it […]