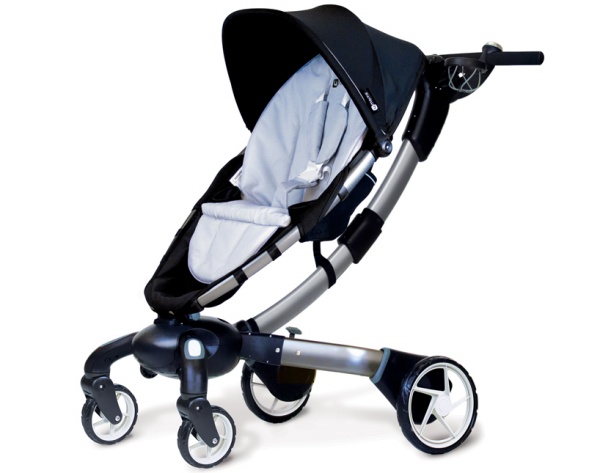 Just imagine having to drag the stroller around, folding it, and unfolding it as you go along (while carrying the said huge baby bag on one shoulder and slinging your handbag in the other.) Sounds like a huge pain, doesn’t it? But with the Origami Stroller, it doesn’t have to be.

With just the push of a button, the Origami Stroller unfolds ready for use, or folds up ready for storage. Aside from that, it also has built-in sensors, a generator, LCD screen that displays your stroller’s settings, pathway lights, daytime running lines, and cup holders. Phew! Did anyone say super stroller?

It’s the world’s first power-folding stroller: at the touch of a button, it folds itself. To open or close the stroller, just push that button and relax while the rest takes care of itself. The Origami has built-in generators so the system recharges itself while you walk. Built-in sensors means it won’t fold a child in the seat, and the two-step activation system means you won’t fold it by accident. All you have to do is look at the display to confirm it knows a child is in the seat, or how charged the battery is, or how far you’ve walked. Easy, convenient, and very cool.

The Origami Stroller will be available early next year from 4moms for $849.99.

Gakken, the Japanese company behind the Colorful Aqua LED Projector that was posted here at GeekAlerts yesterday, has released a DYI origami LED lamp.

Are you looking for a cool sleeve for your iPad? The Origami Smart Sleeve For iPad looks like a good one. This good looking sleeve will protect your iPad and it also folds two ways to make a high angle or low angle stand. That […]

My son recently discovered Origami and he has been making all kinds of neat 3D animals and objects. The artform goes back a long way and it seems like you could create almost anything you can dream of. Well, now you can bring Origami to […]

As most parents will attest, anything that keeps your child safe and occupied while you catch a two minute breather is a good thing. GeekAlerts introduced you to 4moms in the past with the very creative Origami Baby Stroller and now we would like you […]

You can add a little artistic flair to keeping track of time with the Origami Clock, as a pliable polyethylene sheet is twisted and curled while the hands of the clock make their trek across the ABS dial. This particular clock is more about style […]

Unleash the hidden horror with Horrorgami, a 126-page book that lets you create numerous horror scenes from classic horror films and books. So you like Origami but you’re not into Pokemon or Star Wars paper art. Never fear, horrormeister, because this book has what it […]