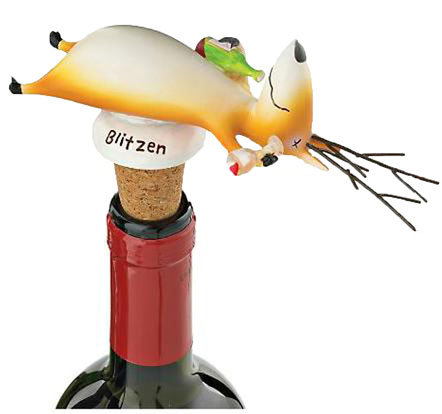 I long to be as carefree and just, well, free in general as Blitzen looks in the Blitzen on His Back Bottle Stopper. Doesn’t really matter how crummy in a mood you’re in, because once you uncork that bottle of wine (and spot Blizten looking oh-so-blissfully drunk), you’ll definitely feel a warm rush of holiday cheer wash over you. (Not only because of Blitzen, but also because of that wine you’re about to partake in, too.)

I don’t recommend that you drink too much and end up looking like Blizten on this bottle stopper, because remember, when it comes to alcohol, it’s best to drink moderately. And if you’re unsure, there’s always the Alcohol by Volume Glass to help you along.

Blitzen on His Back Bottle Stopper

Blitzen does his party animal bit again this year-flat on his back with a wine bottle and glass! Last year’s best-selling bottle stopper promises to be this year’s return favorite. Our deer old friend will do his best to keep air out of your wine bottle while filling the air with laughter! Stuff Blitzen in stockings wrap him up as a gift or treat yourself. Resin on cork.

The Blitzen on His Back Bottle Stopper is available from Amazon for $8.99.

The Plunge Wine Bottle Stopper will definitely make your guests laugh and giggle as they sip back your wine. Which will taste great thanks to this bottle stopper. It’s a bottle stopper shaped like a miniature plunger. This funny wine saver is made of food-grade […]

A lot of us seem to have difficulty remembering, or choose not to remember, how many ounces of beer or spirits equals how many ounces of wine and so forth.  The Alcohol by Volume Glass allows you to drink all your drinks from one glass […]

Star Wars fans can never have too many droids in their lives and just to make sure that you have an Astromech droid for your bottles, here is the Star Wars R2-D2 Bottle Stopper. It’s like a restraining bolt for your wine. This Star Wars […]

This Death Star Bottle Stopper is a fully armed and operational bottle stopper that will stop up your wine bottles. It’s how Darth Vader keeps his wine fresh in his chamber. It won’t blow up any planets thankfully, but your wine will taste amazing. And […]

In today’s vernacular, being a cock blocker is not cool, but the Cock Blocker Bottle Stopper puts the term in a whole different light. This cock will block the bottle opening and keep your beverages fresh. Hence the name. The Cock Blocker Stopper. Try saying […]

How do you stop a Romulan cruiser from attacking a peaceful outpost? The same way you stop a bottle of wine. With the Enterprise. This Star Trek Original Series Enterprise NCC-1701 Wine Stopper is an awesome way to keep your wine fresh. Let the flagship […]