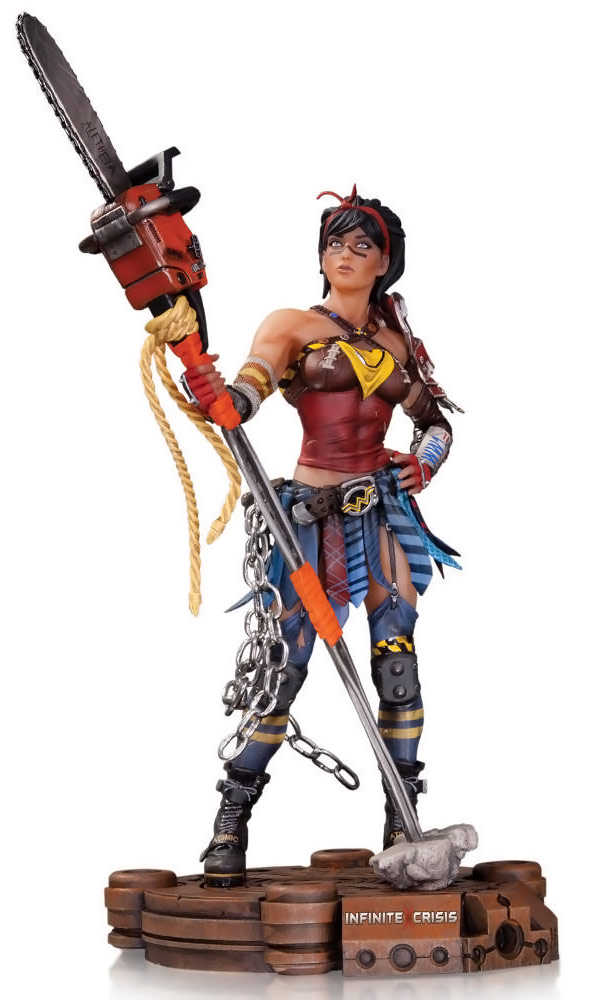 No, this isn’t some weird mash-up that blends DC Comics’ Wonder Woman with The Evil Dead’s Ash. Instead, the Infinite Crisis Atomic Wonder Woman Statue offers up a different look for the popular superhero that will be making an appearance in the upcoming video game, Infinite Crisis.

In an alternate universe (Earth-17 for the comic fans), the appearance of baby Kal-El’s ship in Earth’s orbit makes people freak out and trigger a nuclear war. Out of the ashes of this distorted history comes Atomic Wonder Woman, who’s just a little more hardcore than the WW we all know… just in case the chainsaw mounted on the end of a pole didn’t give you a clue.

Get ready to enter the Atomic age. The Infinite Crisis Atomic Wonder Woman Statue will be available November 2013 but it can be pre-ordered now for $99.99 at Entertainment Earth and $124.95 at the WBShop.com.

The vigilante of Gotham City has taken the mantle of the Bat to a whole new level with the Infinite Crisis: Nightmare Batman Statue, revealing that even the Dark Knight doesn’t always win in the end. In the Infinite Crisis video game, one of the […]

comiXology DC Infinite Earths Sale – Up to 67% Off

For a limited time you can Save up to 67% Off in the comiXology DC’s Infinite Earths Sale! Get these great deals on digital comics and graphic novels, with prices as low as 99 cents per title. Series include Infinite Crisis, Infinite Crisis Specials, The […]

Times are tough and money doesn’t exactly grow on trees these days, but the Financial Crisis Survival Kit can make sure you always have a little cash tucked away for a rainy day. Forget about banks. Most of them charge you for the honor of […]

Warning: this product is only for those aged 18 and above. Okay, so that wasn’t a really serious warning, although I doubt that you’d want your three-year-old son to ask what the pretty lady in the red bikini is doing on your dashboard. What lady, […]