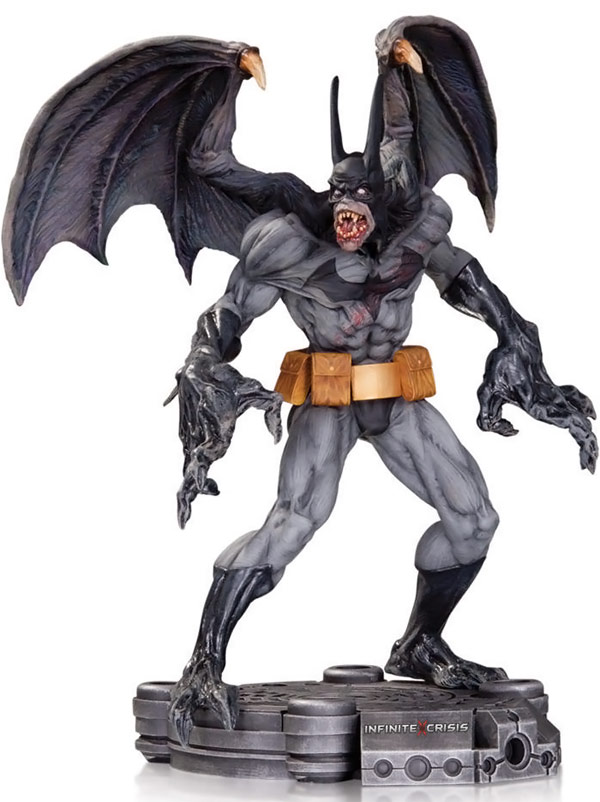 The vigilante of Gotham City has taken the mantle of the Bat to a whole new level with the Infinite Crisis: Nightmare Batman Statue, revealing that even the Dark Knight doesn’t always win in the end.

In the Infinite Crisis video game, one of the playable characters (yah!) shows the end-result of Batman taking on Dracula… and losing. While the millionaire-in-disguise initially used his new vampire abilities to fight the bad guys, he was eventually overwhelmed by the vampire curse and transformed into an unstoppable eating machine that didn’t care if his next meal was a hero or villain.

If you’re a fan of batty things, you’ll want to get your hands on the Infinite Crisis Nightmare Batman Statue. It will be available September 2013 but can be pre-ordered now for $99.99 at Entertainment Earth and $124.95 at the WBShop.com.

comiXology DC Infinite Earths Sale – Up to 67% Off

For a limited time you can Save up to 67% Off in the comiXology DC’s Infinite Earths Sale! Get these great deals on digital comics and graphic novels, with prices as low as 99 cents per title. Series include Infinite Crisis, Infinite Crisis Specials, The […]

Times are tough and money doesn’t exactly grow on trees these days, but the Financial Crisis Survival Kit can make sure you always have a little cash tucked away for a rainy day. Forget about banks. Most of them charge you for the honor of […]