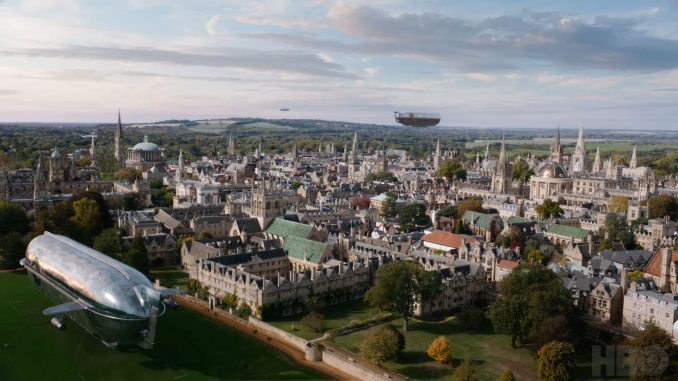 If you like adventure and fantasy, you’ll want to check out the His Dark Materials San Diego Comic-Con Trailer. Based on the trilogy of novels by Philip Pullman (The Golden Compass, The Subtle Knife, and The Amber Spyglass), this series will be coming to HBO this fall.

If you’re a fan of the book series and were disappointed by the 2007 The Golden Compass film (that starred Nicole Kidman, Daniel Craig, Dakota Blue Richards, Sam Elliott, Eva Green, and Ian McKellen), this will hopefully be a chance to see this story done right.

HBO and BBC presents His Dark Materials, a new original series based on the global bestseller, premiering this fall.

His Dark Materials stars Dafne Keen, James McAvoy, Ruth Wilson and Lin-Manuel Miranda. Adapting Philip Pullman’s award-winning trilogy of the same name, which is considered a modern masterpiece of imaginative fiction, the first season follows Lyra, a seemingly ordinary but brave young woman from another world. Her search for a kidnapped friend uncovers a sinister plot involving stolen children, and becomes a quest to understand a mysterious phenomenon called Dust. As she journeys through the worlds, including our own, Lyra meets Will, a determined and courageous boy. Together, they encounter extraordinary beings and dangerous secrets, with the fate of both the living — and the dead — in their hands.

We’ve already seen the Comic Con Trailer and the One Girl Will Change Worlds Trailer, but now we finally get to see the His Dark Materials Official Trailer. His Dark Materials: Season 1 will premiere on HBO on Monday, November 4, 2019. Watch the His […]

Today HBO released the Watchmen Official Comic-Con Trailer, the followup to the Teaser Trailer from last May. This television series, which will debut in October on HBO, is based on Alan Moore’s acclaimed graphic novel as remixed by showrunner Damon Lindelof. See the Watchmen Official […]

If you saw the Teaser Trailer back in May, you’ll remember it didn’t show much besides for Captain Jean-Luc Picard on a vineyard. Although this Star Trek: Picard Comic-Con Trailer kicks off with more footage of the vineyard, fortunately, it goes on to show a […]