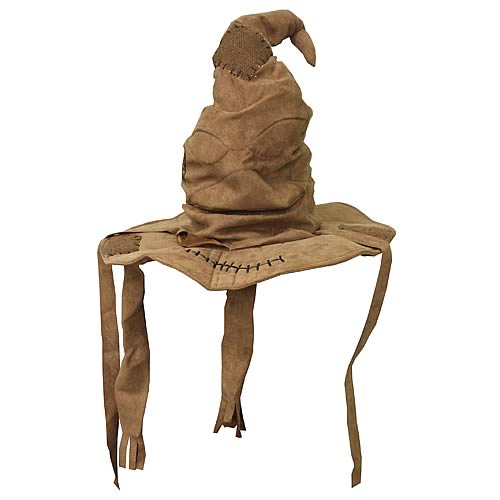 The movie depicting the final installment of Harry Potter’s adventure and life at Hogwarts is coming soon. I’ve been a fan of the books and the movies ever since they came out almost a decade ago and will definitely be lining up at the cinema once the movie drops. In the meantime, you can satisfy your Potter obsession by going back to the beginning to where it all started with the Harry Potter Talking Sorting Hat Plush.

If you’re a true-blue fan of the series by J.K. Rowling, then you will recognize and know what the Sorting Hat is straight away. It’s the hat that is worn by every new student at Hogwarts and it’s what determines the House where the enrollee will be assigned to for the rest of his or her wizardry life at Hogwarts. Are you ready to be a part of the magic?

Which Hogwarts wizarding house is right for you? Only the legendary Sorting Hat can tell if you will be a Gryffindor, Hufflepuff, Ravenclaw or a Slytherin. And now he’ll really tell you, with this talking plush version of the mythical Sorting Hat of Hogwarts School of Witchcraft and Wizardry!

Hogwarts has a new dress code so make sure to add the Harry Potter Corsets to your shopping list when you go shopping for your wand, broom, cauldron, and other assorted wizarding paraphernalia. Are you Gryffindor, Hufflepuff, Ravenclaw, or Slytherin? It doesn’t matter because there’s […]