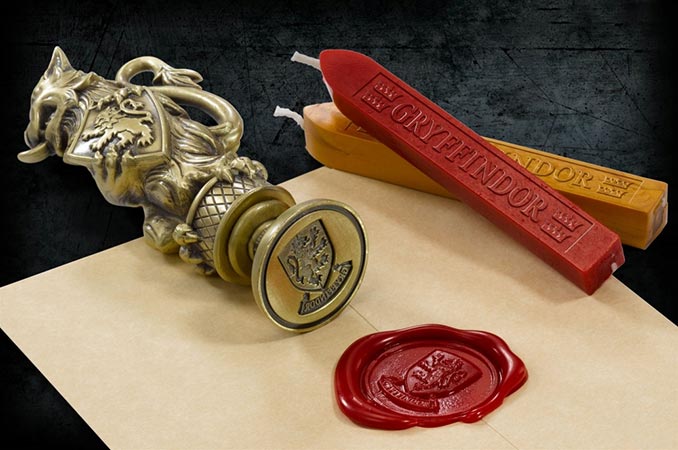 Seal private invitations, secret messages, or even just your electric bill with there Harry Potter Hogwarts House Wax Seals. There is one for each of the Hogwarts Houses, so you are set no matter which house the Sorting Hat assigned you to:  Gryffindor, Slytherin, Hufflepuff, or Ravenclaw. Each seal makes a House shield impression in melted wax. Made of diecast metal, the seals are about 4″ long and have impressive handles featuring the House mascot holding the shield. Each set also comes with two sticks of sealing wax in the house colors. 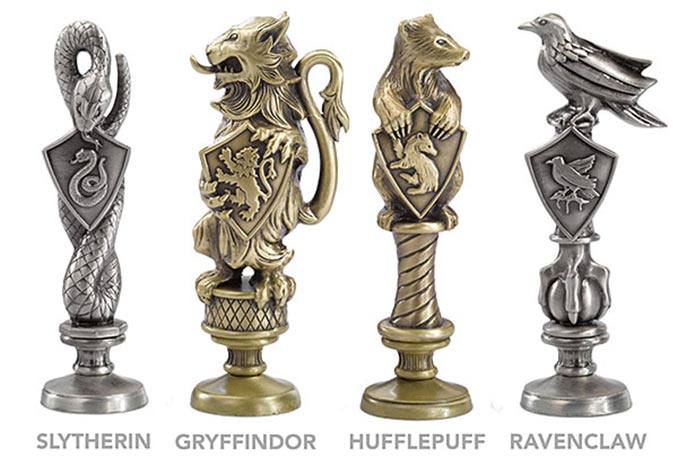 For those unfamiliar with sealing wax, it is really quite easy. You take your letter and fold it or put in into an envelope. Then just light the wax stick (or a candle) and drip wax in the spot where you want the seal (such as the middle of the edge of the envelope flap). While the wax is still hot, press it firmly with the seal. You’ll end up with a wax seal featuring the House shield. If anyone opens the letter, it will be obvious because the seal will be broken.

Make every letter you send have the magic of the first Hogwarts letter! This wax seal kit comes with two wax sticks and a metal Gryffindor crest stamp featuring the Gryffindor lion.

Buy the Harry Potter Gryffindor Wax Seal at BoxLunch or ThinkGeek. It lists for $29.99, but currently both sites have it on sale.

Purchase the Harry Potter Slytherin Wax Seal at BoxLunch or ThinkGeek. The MSRP is $29.99, but it is currently discounted.

Buy the Harry Potter Hufflepuff  Wax Seal at BoxLunch or ThinkGeek, where it is currently discounted off the $29.99 list price.

Find the Harry Potter Ravenclaw Wax Seal at BoxLunch or ThinkGeek. Like the other houses, this one lists for $29.99 and is currently on sale for less.

Which Hogwarts’ House do you belong to? Did the Sorting Hat put you in Gryffindor, Hufflepuff, Ravenclaw, or Slytherin? No matter which, there’s one of these Harry Potter Hogwarts House Varsity Hoodie Jackets for you. Show your pride in your House with one of these […]

Hogwarts has a new dress code so make sure to add the Harry Potter Corsets to your shopping list when you go shopping for your wand, broom, cauldron, and other assorted wizarding paraphernalia. Are you Gryffindor, Hufflepuff, Ravenclaw, or Slytherin? It doesn’t matter because there’s […]

Those attending Hogwarts belong to one of the houses and have ties to match. Choose your house and get one of your own Harry Potter House Ties. These ties are classy and stylish and made from 100% silk. They feature the colors and coat of […]

These Harry Potter House Watches are stylish and colorful. You can choose from Gryffindor, Hufflepuff, Ravenclaw, or Slytherin. They feature a house crest on the watch face. You will be a time keeping wizard with these watches. They are a great way to show off […]